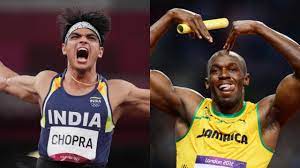 NEW DELHI (AFP): Usain Bolt has failed to top the list of the most written about athletes for the first time in years in a sign that track and field is emerging from the hold the retired Jamaican sprint legend had over the sport.

World Athletics said that in 2022, Indian javelin star Neeraj Chopra displaced the charismatic Bolt, who is still the world record holder in the 100m and 200m despite retiring in 2017.

Chopra had a terrific year, finishing runner-up in the world championships in Eugene, Oregon — only the second Indian to win a global medal after Anju Bobby George’s bronze in the women’s long jump in 2003 — and became the first athlete from his country to win the Diamond League final in the javelin.

That followed up his Olympic gold medal in Tokyo last year.

The federation’s president Sebastian Coe said 2022 “looks and feels very different to me”.

“It is an interesting one. For the first time this year Usain Bolt has not led the list of the most written about athletes of the year,” Coe said in a briefing with international news agencies.

He said the discussion had moved on from 2021 and talk of Caster Semenya and Christine Mboma, two athletes who have had to change events because they have elevated testosterone levels.

“The year before it was pretty self-evident why some of those athletes were on the list: Caster Semenya, Christine Mboma,” he said.

“This year looks and feels very different to me.”

Coe said Bolt, the winner of the sprint double for three Olympics in a row, still played a valuable role promoting the sport but his time was curtailed by a host of sponsorship and publicity deals he has netted since retiring from the track.

“He did a lot of work around Tokyo (the Olympics last year) and he has been there and thereabouts for Diamond League events,” said Coe.

“We recognise any time Usain Bolt can give to the sport but he does have a pretty full dance card.

“I know the guys who work alongside him and he is pretty busy commercially, and contracted across extensive areas.

“The more time with Usain the better but there are constraints across that.”

Coe said the increased exposure for other athletes was due reward for a “really challenging year” and one “we did not plan for,” as the world championships had been moved a year later to accommodate the pandemic-delayed Olympics.

“We should not also forget the Commonwealth Games and the European Championships and they also competed in a full Diamond League season plus a lot of Continental Tour events and national selections,” he said.

“For me it is a fabulous example of resilience and fortitude and simple determination to stay at the top of their game and they have done that.

“It is primarily through their efforts that athletics has really started to grow again in popularity and gained more broadcast hours.”

Coe — who said he was looking forward to the world championships in Budapest in 2023, which is the 40th anniversary of the inaugural event held in Helsinki — said it had been a year to treasure given the disruption caused by Covid in the two years previously.

“I am very, very proud of what we have achieved to set aside the 2020-2021 travails,” said the two-time Olympic champion.

“To be able to get as much off the starting blocks was a real testimony that we bounced back stronger than many other sports.”