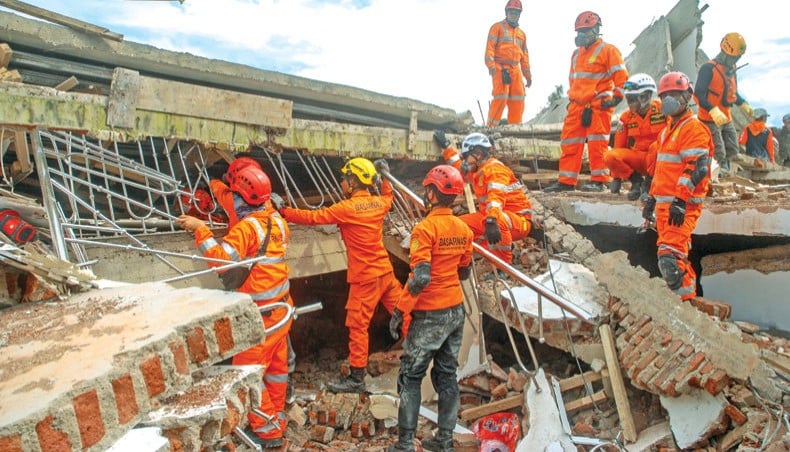 JAKARTA (AFP/APP): The death toll from an earthquake that hit Indonesia’s main island Java last month has jumped by hundreds to 602, a local administration official said Friday, after authorities verified unreported casualties across the worst-hit town.
The shallow 5.6-magnitude earthquake hit the town of Cianjur in Indonesia’s most populous province West Java on November 21, with most of the victims killed as buildings collapsed or landslides were triggered.
Cianjur local administration spokesman Adam, who like many Indonesians goes by one name, told AFP the new toll — up from a previously reported figure of 334 — was based on data collected from residents across the town.
He said many people had rushed to bury their relatives after the disaster without reporting their deaths to authorities.
“If someone dies, residents in Cianjur often immediately bury them. Because of the panicked situation, those who died were immediately buried by relatives without notifying the local health agency,” he said.
“It was later revealed that around 600 people died, when it is officially counted,” he added, citing the administration’s new figure of 602.
The local rescue agency, known as the BPBD, posted the new death toll on social media. An official from the agency, Wawan Setiawan, confirmed the new toll to AFP.
State news agency Antara on Friday cited Cianjur district head Herman Suherman as giving a new death toll of 602.
National disaster mitigation agency spokesman Abdul Muhari told AFP it was still sticking with a lower death toll of 335 but was working to verify the new figure.
“Because they were immediately buried and were not reported, their names were not included in the missing people list,” he said.
“The district head said they already have the data, regardless we still need to verify.”
To claim government aid, relatives must remove victims from their family registry and receive a death cerificate from local authorities, he said.
The tremor was the deadliest in the archipelago nation since a 2018 quake and resulting tsunami killed more than 4,000 people on the island of Sulawesi.
Many were found buried under rubble in the days following the quake, with only several successful rescues reported, including an operation to free a six-year-old boy that was described as a “miracle” by emergency workers.
The quake damaged more than 62,000 houses and forced more than 73,000 people to evacuate to at least 325 shelters, officials said.
Indonesia experiences frequent seismic and volcanic activity due to its position on the Pacific “Ring of Fire”, where tectonic plates collide.
A 6.2-magnitude quake that shook Sulawesi island in January 2021 killed more than 100 people and left thousands homeless.