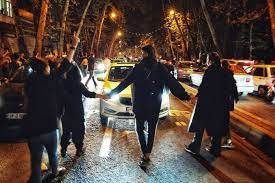 The Islamic republic has been gripped by unrest since the September 16 death in custody of Iranian Kurdish Amini, 22, following her arrest for allegedly violating the country’s strict dress code for women.

Khamenei, who has the final say in major state policies and is commander-in-chief of Iran’s armed forces, appointed General Ahmad-Reza Radan to replace Hossein Ashtari, said a statement posted on the leader’s official website.

Khamenei ordered the police department to “improve its capabilities” as well as “train specialized forces for various security sectors.”

Radan, born in 1963, was deputy police chief from 2008 to 2014 and went on to lead the police’s Center for Strategic Studies. He was replaced as deputy by Ashtari, who was made the force’s commander in 2015.

Both Radan and Ashtari began their military career in the powerful Islamic Revolutionary Guard Corps.

The new police chief was sanctioned by the United States in 2010, and later on by the European Union, over “human rights abuses” in connection with protests that followed Iran’s contested presidential elections of 2009.

Iranian authorities describe the current nationwide protests as “riots” and say hundreds of people, including members of the security forces, have been killed and thousands arrested.