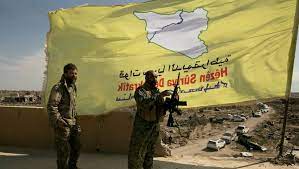 The Syrian Kurds have been seeking to underline their value as a partner to the West in its campaign against Daesh as NATO ally Turkiye keeps up its threats to launch a new cross-border assault against territory under their control.

“During the sweep and raid operations, our forces arrested 154 wanted terrorists… and criminals,” the SDF said in a statement.

They included 102 suspected Daesh cell members and 27 others suspected of providing logistical supplies or propaganda, the statement added.

SDF fighters swept 55 villages and farms in the east as well as “large areas of the Syrian-Iraqi border.”

The SDF said the operation was carried out alongside troops of the US-led coalition, although there was no immediate confirmation from the international force.

It prevented attacks on the main Kurdish cities of Hasakah and Qamishli during the Christmas and New Year holidays, the statement said.

Last week’s foiled prison break in Raqqa was the most significant Daesh operation in Syria since a successful break from Ghwayran prison in Hasakah last January.

Three of the suspects detained in the past week’s sweep were implicated in providing bombs and other equipment for the Ghwayran attack, the SDF said.

Although Daesh is a pale reflection of the organization that seized vasts swathes of Syria and neighboring Iraq and declared a “caliphate” in 2014, it still boasts a network of sleeper cells on both sides of the border that remains capable of carrying out deadly assaults.