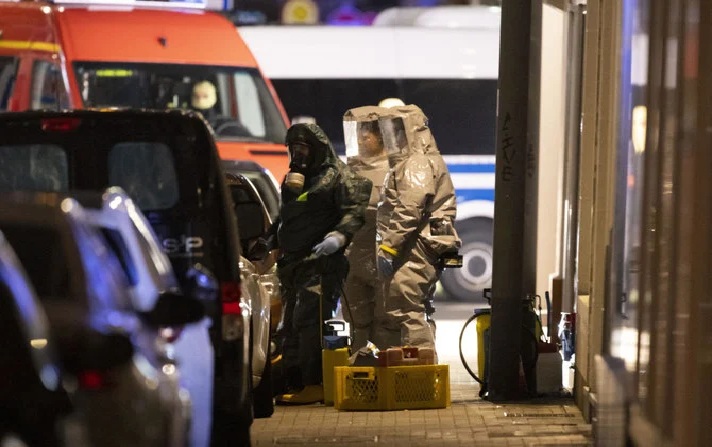 BERLIN (AFP): An Iranian man has been arrested in western Germany suspected of preparing an “Islamist attack” using cyanide and ricin, police and prosecutors said Sunday.

Muenster police and the Duesseldorf prosecutors’ office said in a press release that officers searched a residence in the town of Castrop-Rauxel for “toxic substances” intended to carry out an attack.

The 32-year-old Iranian was “suspected of having prepared a serious act of violence threatening the security of the state by obtaining cyanide and ricin with a view to committing an Islamist attack,” said investigators.

The arrest was carried out shortly before midnight on Saturday evening, a spokeswoman for the police said. Another person, said to be the main suspect’s brother, was also taken into custody during the operation, she said.

The 32-year-old suspect will be presented in the coming days to an investigating judge ahead of possible pre-trial detention, police said.

Ricin is a highly toxic substance, which is classed as a “chemical weapon” in Germany. Similar to cyanide, ricin can be lethal.

According to local media reports, the raids were carried out by agents wearing protective suits, due to the chemical hazard.

German authorities were tipped off to the risk of an attack with a “chemical bomb” several days ago by a foreign intelligence service, the German daily Bild reported.

In 2018, a Tunisian man and his wife were arrested on suspicion of planning a biological bomb attack in Germany.

The couple, who sympathized with the Daesh group, were found in possession of 84 milligrams of ricin in their Cologne apartment. The man was sentenced to 10 years in prison in 2020, while his wife received an eight-year sentence.

Germany has been targeted in recent years by several Islamist attacks, including a 2016 truck attack on a Christmas market, that killed 12 people and left dozens injured.