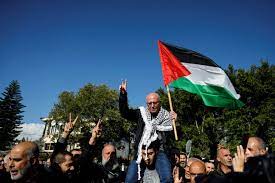 ARA, Israel (Reuters): One of Israel’s longest serving Palestinian prisoners went free on Thursday after completing a 40-year sentence, as members of the new right-wing government called for him to be stripped of his citizenship.

Karim Younis, 60, was convicted of kidnapping and killing Israeli soldier Avraham Bromberg in 1983 in the Israeli-occupied Golan Heights. He served the longest continuous sentence of any Palestinian, according to the Palestinian Prisoners Association.

In his hometown, the Israeli Arab village of Ara, Kounis received a hero’s welcome. Shrouded in a traditional Palestinian shawl, he was greeted by family, friends and supporters chanting and carrying him through the streets on their shoulders.

“It was 40 years full of stories, prisoners’ stories and each story is a story of a nation,” Younis said. “I am very proud to be one of those who made sacrifices for Palestine and we were ready to sacrifice more for the sake of the cause of Palestine.”

Arabs in Israel account for around a fifth of the population and most are descendants of Palestinians who remained within the newly founded state after its 1948 war of independence.

They have long debated their place in Israel’s politics, balancing their Palestinian heritage with their Israeli citizenship, with many identifying as or with the Palestinians.

Palestinians regard brethren jailed by Israel as heroes in a struggle for statehood in territories Israel captured in the 1967 Middle East war. Israel considers those convicted of violence against its citizens to be terrorists.

On Tuesday, Israeli Interior Minister Aryeh Deri called for Younis to be stripped of his Israeli citizenship.

“Revoking his citizenship will send an important message,” Deri wrote in a letter to Israel’s Attorney General, “when we are speaking about someone who has become a symbol for committing criminal acts of terror.”

Some relatives of Israelis killed in Palestinian violence have also voiced support for this kind of measure.

“Israeli citizenship is a privilege. An Israeli citizen can’t hold an Israeli ID card with one hand and murder a soldier with another and it can’t be that the murderer will be freed from jail and walk around like anyone among our nation,” Avraham Bromberg’s nephew, who is also named Avraham in his uncle’s memory, told the Israeli Walla news site on Monday.