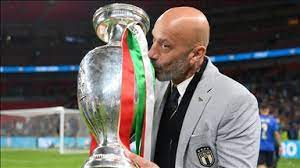 ROME (Agencies): Former Juventus, Chelsea and Italy striker Gianluca Vialli has died of pancreatic cancer aged 58, sparking a stream of tributes to a player who was stylish on and off the pitch.

Vialli was diagnosed with cancer in 2017 but was still able to play a significant role in Italy’s European Championship title-winning campaign in 2021 assisting long-time Sampdoria strike partner and national coach Roberto Mancini.

However, he announced a temporary leave from his role with the national team in December to focus on his health. Vialli spent eight seasons at Genoa-based Sampdoria before joining Juventus in 1992 for a then world record 16.5 million Euros.

He won the Champions League with Juventus before joining Chelsea in 1996 and becoming player-manager in 1998.
“We have always been with you, Gianluca,” a statement read on Juventus’ official website.

“Ever since you arrived in 1992, when it was love at first sight.

“We loved everything about you, absolutely everything — your smile, you being a star and leader at the same time, on the pitch and in the dressing room.

” At Chelsea, Vialli took over from the sacked Ruud Gullit late in the season, and went on to lead the club to victory in the League Cup, UEFA Cup Winners’ Cup and UEFA Super Cup.

He also guided Chelsea to victory in the 2000 FA Cup final but was sacked in the following season.

Chelsea’s current co-owners Todd Boehly and Behdad Eghbali said in a statement: “This is truly an awful day for Chelsea Football Club. Gianluca’s legend will live on at Stamford Bridge.

“His impact as a player, a coach and most importantly as a person, will be forever written across our club’s history.”Sampdoria, where Vialli won the Serie A title and European Cup Winners’ Cup, said in their statement: “You came as a boy, we salute you as a man.

“We will not forget your 141 goals, your backhands, your cashmere jerseys, your earring, your platinum blond hair, your Ultras bomber. You gave us so much, we gave you so much: yes, it was love, mutual, endless. A love that will not die, today, with you.”