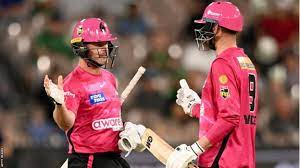 Melbourne (Agencies): England batter James Vince hit an unbeaten 91 from 59 balls to help Sydney Sixers seal a thrilling win over Melbourne Stars in the Big Bash League. The Hampshire captain hit nine fours and two sixes as the Sixers moved one point clear at the top of the table. Jordan Silk’s huge six in the final over nudged the visitors closer to victory, before Dan Christian hit the winning runs with the penultimate ball. Marcus Stoinis earlier hit 52 off 28 balls as the Stars posted 173-5.

The result leaves the Stars bottom of the table with just two wins from their eight matches so far. With England one-day seamer Luke Wood bowling the last over, 11 runs were still needed at the Melbourne Cricket Ground. Vince should have been run out pushing for two off the first ball but Nottinghamshire’s Joe Clarke, keeping wicket, fumbled the throw in from the outfield and missed the stumps with Vince short of his crease. A single followed next ball before Silk’s huge six tipped the match in the Sixers’ favour, but he was given out the next delivery via the Decision Review System when he was adjudged to have nicked an attempted uppercut through to the keeper. Two runs were still needed from the final two balls, but new batter Christian kept his composure to clip his first delivery through square leg for four to seal the win.