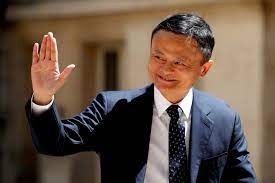 One of China’s most recognisable entrepreneurs, Ma once exemplified a generation of Chinese technology moguls with his rags-to-riches personal tale and penchant for public showmanship.

But the former English teacher has retreated from public view since Beijing torched Ant’s planned initial public offering in Hong Kong in 2020 following his barbed comments about government regulators.

His company said in a statement on Saturday it was adjusting its ownership structure so that “no shareholder, alone or jointly with other parties, will have control over Ant Group”.

He will hold just 6.2 percent of the voting rights following the adjustment, based on information in the statement.

“The adjustment is being implemented to further enhance the stability of our corporate structure and sustainability of our long-term development,” the Ant statement said.

Ten individuals — including the founder, management and staff — will “exercise their voting rights independently”, it said.

The adjustment will not change the economic interests of any shareholders.

Ant operates Alipay, the world’s largest digital payments platform, which boasts hundreds of millions of monthly users in China and beyond.

Ant’s planned IPO would have been a world-record listing at the time, and its damaging withdrawal came days after Ma launched a stinging public attack on Chinese regulators.

In a speech at a summit in Shanghai, the mercurial tycoon said banks operated with a “pawnshop” mentality and accused financial watchdogs of stifling growth.

However, in a sign that the official grip may now be loosening, authorities said last month Ant had won approval to raise 10.5 billion yuan ($1.5 billion) for its consumer finance arm.

An office of the China Banking and Insurance Regulatory Commission in the southwestern city of Chongqing will let the firm raise its registered capital from eight billion yuan to 18.5 billion yuan, according to a notice issued on December 30.

News of the approval sent shares in Alibaba soaring almost nine percent in Hong Kong trading, while other tech firms were also boosted on hopes the sector crackdown could be easing.

Alibaba’s latest earnings data in November showed a loss of 20.6 billion yuan for the third quarter. The company did not release full sales figures for its Singles Day shopping bonanza in 2022 for the first time.

The e-commerce festival is seen as an important gauge of Chinese consumer sentiment, and once saw Ma share a stage with major Chinese and Western celebrities, but has become more muted in recent years.

Ma has maintained a lower profile since Ant’s failed IPO, punctuated by appearances at charity events and occasional sojourns overseas. He was in Thailand this week, Bloomberg News reported Saturday.