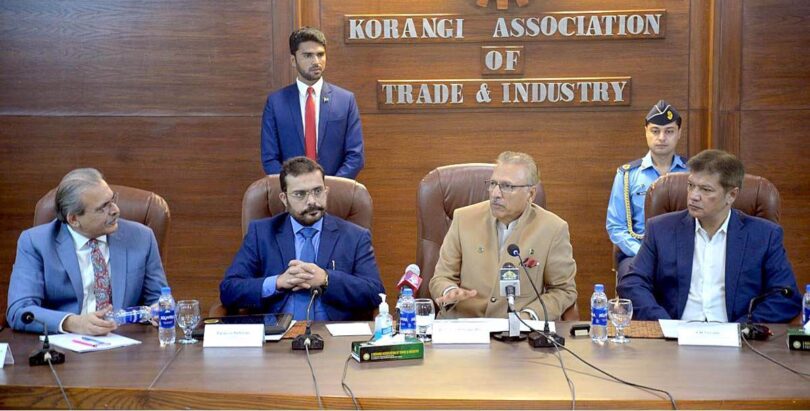 KARACHI: President Dr Arif Alvi has urged the Korangi Association of Trade and Industry (KATI) to enhance women’s participation in business sector and labour force as they could play an integral part in our society. He called for taking practical and time-bound steps to increase women’s inclusion in the productive workforce and creating a safe, conducive, and women-friendly environment at the workplaces.

The President expressed these views during his visit to Korangi Association of Trade and Industry (KATI) on Saturday.

Speaking on the occasion, the President said that businessmen played an important role in shaping business practices as well the opinion of society, and that they must set goals and directions in order to achieve the financial objectives of enterprises for economic prosperity, in addition to playing their role to make businesses dispense their responsibilities towards society. He said that persons with disabilities needed to employed in different sectors of the economy, while also keeping in view their particular skill-set and the nature and extent of their disability.

While alluding to the economic success of emerging economy of Vietnam with intellectual resources in the IT sector, the President said that the intellectual and human resource development of nation must equally be focused on in addition to developing its natural resources. He urged the need to establish and strengthen the academia-industry linkages to produce graduates that could fulfill the market’s requirements, besides coming up with solutions to the problems being faced by the local industry.

The President urged the business community to follow the path of the founder of Pakistan by pursuing the unity, faith and discipline to become successful in every walk of life and hoped that the business community would continue to strengthen economy of the country.
The President further said that it was encouraging that despite the challenges, Pakistan’s exports for the first time in history had touched US $ 30 billion mark and said that the government was committed to provide a competitive and fair business environment to entrepreneurs and had taken necessary steps to achieve the purpose.

Later on, the President distributed awards among the office bearers of KATI on their achievements in the economic sector.