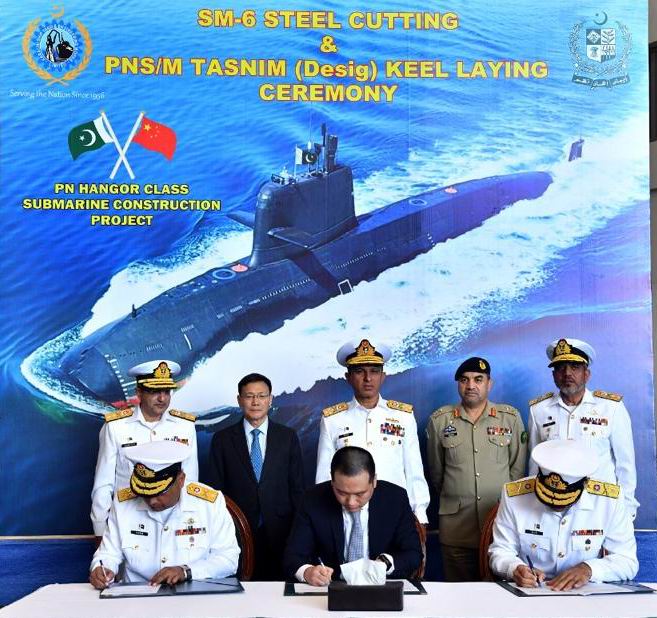 The defence agreement between Pakistan and China included development of 08 x HANGOR Class Submarines including 04 under constructions at Wuchang Shipbuilding Industry Group (WSIG) in China and remaining 04 being built at KS&EW under Transfer of Technology (ToT) agreement. The construction work of first submarine to be made at KS&EW Pakistan commenced in Dec 21 and now the Keel Laying is being laid which is a major milestone in history of any naval vessel being constructed. Concurrently, construction work on subsequent submarine has started with its Steel Cutting at the same shipyard.

HANGOR Class Submarine is capable to undertake variety of missions as per operational dictates. The submarine possesses advanced stealth features and fitted with State-of-the-Art weapons and sensors to operate under multi-threat environment and can engage targets at stand-off ranges.

On the occasion, the honorable Chief Guest expressed that it is a matter of great pride to witness the Keel Laying and Steel Cutting of two submarines concurrently. He added that Pakistan Navy is aware of the evolving Geo-strategic situation in our region and will continue to develop naval potential, improve shipbuilding infrastructure and equip platforms with advanced weapons/ sensors to counter traditional as well as asymmetric threats. The Admiral showed confidence that these submarines will play leading role in catering the operational needs of Pakistan Navy.

Earlier the distinguished Rep of M/s China Shipbuilding Offshore Company (CSOC) expressed his gratitude for the ceremony. He added that his company will ensure seamless provision of all resources/ support for smooth construction of submarines in Pakistan. He further said that Pak-China friendship is deep rooted and share common objectives.

The ceremony was attended by representatives of M/s CSOC (China) and other high ranking officials including distinguished guests from Embassy of China, Ministry of Defence Production, Pakistan Navy (PN) and KS&EW.