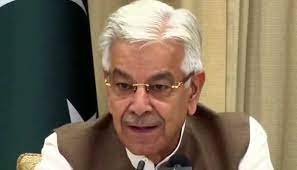 ISLAMABAD: Defence Minister Khawaja Asif has rejected the criticism of the PTI on the appointment of Punjab caretaker Chief Minister Syed Mohsin Raza Naqvi saying his appointment has been made as per the requirements of constitution and law.

Addressing a presser in Islamabad on Monday, the defence minister refuted any role of the newly-installed caretaker Chief Minister Naqvi in the Haris Steel Mills case.

He said that the Election Commission of Pakistan appointed the Punjab caretaker chief minister while following all the constitutional and legal requirements.

Asif at the start of his media briefing congratulated the interim chief minister for assuming his new responsibilities. He wished that under his leadership free and fair elections would be held in Punjab.

“The PTI has no constitutional justification to raise an objection to the appointment of Mr Naqvi as Punjab caretaker CM,” the minister said adding if Imran Khan wanted to go to the court, then it would be a court fight and they would contest it.

The minister clarified that the nominees presented by PTI and others did not have good exercise as one of the nominees was a serving government employee and the other was a dual national. “Their vetting was not good for these nominees. So that’s why they had to face humiliation in this case,” he added.

Moreover, the government’s nominees had one ex-civil servant and one media personality, he said, adding, “PTI also gave the name of another honourable bureaucrat who himself apologised to take the task. Hence the PTI’s objection on Naqvi’s appointment is a fake lamentation.”

Asif also lamented that former chief minister Chaudhry Pervaiz Elahi who is Mr Naqvi’s relative has turned against his own kin in his old age.

Lashing out at the PTI chairman, the minister said whenever Imran was elected as MNA, he opted to tender his resignation.

He said that the former premier had lost his balance of mind as he believed that the assembly came into being as a result of a conspiracy.

“The PTI MNAs and its workers are paying the price of Imran Khan’s wrong decisions,” Asif said adding that Imran would soon realize in the elections what his worth and ability were.

He said that the PTI MNAs tendered their resignations almost a year ago but they were still getting benefits and privileges.

“Imran Khan is a failed project and he is gradually getting out of politics,” he noted.

Asif said the PTI chief tried to start his long march and claimed to bring 2.5 million people onto roads but he could hardly bring 25,000 people out on the streets.

“Imran has got a lust for power and money,” he said adding that the previous government had destroyed the country’s economy. He maintained that the current PDM government was aware of people’s problems but “it is not appropriate to blame us for all the wrongs done by the previous PTI government.”

He said that Imran had no shame as he kept using swearing words against the chief election commissioner and then demanded justice from the same CEC. In the same way, the former premier used to heap praises on ex-army chief general ® Qamar Javed Bajwa when in power, but when out of power, he started calling his names, Asif observed.