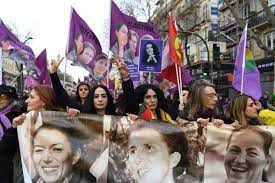 PARIS (AP): Kurdish groups from around France and Europe are marching in Paris on Saturday to show their anger over the unresolved killing of three Kurdish women activists in the French capital 10 years ago.

The marchers are also mourning three people killed outside a Kurdish cultural center in Paris two weeks ago in what prosecutors called a racist attack.

Escorted by police, about a dozen buses from Germany, the Netherlands, Switzerland and Belgium carried Kurdish activists to the start of the march, near the Gare du Nord train station in northern Paris. The demonstration is timed to mark the 10th anniversary of the killings of Sakine Cansiz, Fidan Dogan and Leyla Saylemez on Jan. 9, 2013.

Cansiz was a founder of the Kurdistan Workers’ Party or PKK, which Turkiye, the United States and the European Union consider a terrorist group.

Kurdish activists suspect the Turkish intelligence service was involved in the killing. The suspected attacker, a Turkish citizen, died in French custody before the case reached trial. Turkish officials suggested at the time that the killings may have been part of an internal feud among Kurdish activists or an attempt to derail peace talks.

Paris police were on alert Saturday after skirmishes at Kurdish gatherings in the past, notably in response to last month’s shooting.

After the Dec. 23 attack, the suspected assailant told investigators he had a “pathological” hatred of non-European foreigners, according to prosecutors. He was handed preliminary charges of racially motivated murder, though Kurdish activists suspect the attack was politically driven.

Turkiye summoned France’s ambassador last week over what it called propaganda by Kurdish activists in France after the shooting. Some have marched in Paris with flags of the PKK, which is banned in Turkiye.

The PKK has waged a separatist insurgency against the Turkish state since 1984. Turkiye’s army has battled Kurdish militants affiliated with the PKK in southeast Turkiye as well as in northern Iraq, and recently launched a series of strikes against Kurdish militant targets in northern Syria.