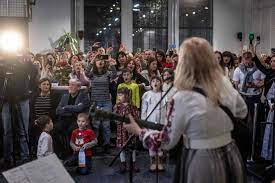 WARSAW (AFP): Filled with sadness and hopes of a victorious 2023, hundreds of Ukrainian refugees celebrated their first Christmas since fleeing the Russian invasion at a contemporary theater in Warsaw.

The celebrants at the Nowy Teatr, a former truck repair workshop, were among the 1.5 million Ukrainians who have settled in Poland since the war began — the highest number for any country.

Almost all were women as most Ukrainian men of recruitment age are not allowed to leave.

They spoke of the pain of marking the family holiday separated from husbands and sons.

“How can one feel?” said Svitlana Borysova, a hairdresser, before breaking down in tears.

Helped by friends, Borysova left Ukraine in the first days of the war with her two children, aged three and six, but had to leave her 21-year-old son behind.

Olena Sigitova, who came to the dinner with her 10-year-old daughter Daryna, said: “We feel sad but there are new friends, new opportunities.”

“At least we are not alone,” she said, wearing a paper crown typical of Polish Christmas celebrations for the Three Kings feast day.

The Christmas Eve meal was organized by the Ukrainian House in Warsaw — a non-governmental group that has helped refugees settle in Poland.

“The main goal is to give warmth, a sense of home,” Myroslava Keryk, head of the organization, told AFP.

The meal included popular Ukrainian dishes such as borscht beetroot soup as well as vareniki, a type of dumpling, and kutia — a wheat grain pudding.

About 500 people attended the dinner, which also featured typical Ukrainian carols and words of support for the soldiers defending their country.

“The most important thing for everyone this year is victory. We dream about it to be able to calm down and think about the future,” Keryk said.

Several of the women said childcare duties meant they had difficulty finding steady work but that their children were settling in and beginning to learn Polish in kindergartens and schools.

Sigitova, from Dnipro in eastern Ukraine, said she found it difficult to make time for Polish classes and was grateful to the host family who has put her and her daughter up since the beginning of the war.

“They said we can count on them as long as we need,” said Sigitova, whose husband is in the army.

Borysova said that during the first three months in Poland she barely left the house.

“I was so afraid, panicking,” she said.

Since then, she has been working as a hairdresser in people’s homes, unable to find more settled work because of having to look after her children.

But Natalia Golomsha, who attended the dinner with her eight-year-old son Marko, said she had managed to find a full-time job in a company that helps Ukrainian children study in Poland.

“I was helped a little by my friends, my contacts, but also by the desire and ability to adapt to the conditions,” she said.

Kateryna Krahmalova, a university researcher from Kyiv, said she had also found work and had the advantage of already speaking Polish.

“The main thing is that my loved ones are with me, so my home is where they are,” she said.