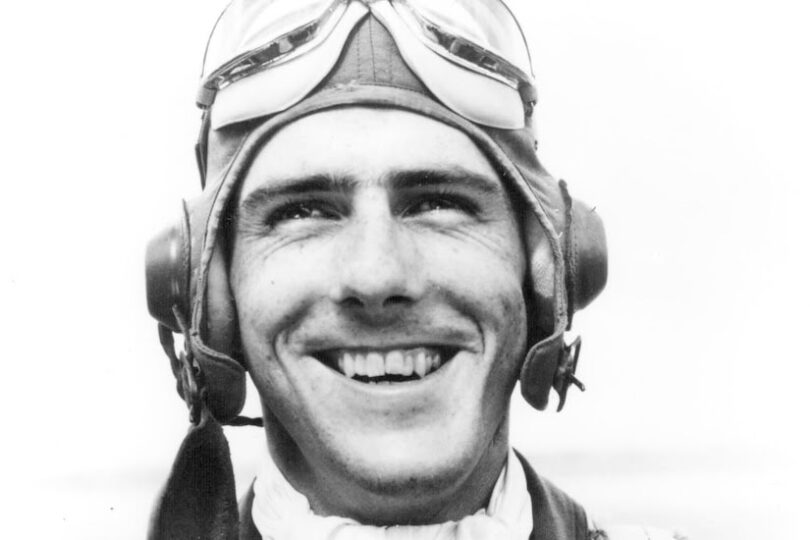 WASHINGTON: During World War II, Army Air Corps Maj. Thomas B. McGuire Jr. was a legend. The young pilot became one of the top-scoring airmen in U.S. air combat history in a very short timeframe. His skills and prowess in the air also helped him earn the Medal of Honor over Christmas 1944.

McGuire was born Aug. 1, 1920, in Ridgewood, New Jersey, to parents Thomas and Pauline. He was the only child of the fairly affluent couple, who owned an automobile dealership.

McGuire’s parents eventually separated, so he moved with his mother to Sebring, Florida, where he spent his teenage years playing various musical instruments and becoming a sports car enthusiast. He also grew interested in flying after hearing stories from an uncle who was a World War I pilot.

After graduating high school, McGuire went to the Georgia School of Technology (now Georgia Tech) to study aeronautical engineering. However, he left in July 1941 after his third year of studies to join the Army Air Corps as World War II raged. McGuire trained to be a fighter pilot, earning his wings and a commission in February 1942.

His first assignment was flying patrols over the Aleutian Islands and Alaska in a P-39 Airacobra. That’s where he honed his instincts as a pilot – something that seemed to come natural to him. In December 1942, McGuire transitioned to flying the P-38 Lightning. That same month, he married Marilynn Giesler, whom he had met during training in Texas.

In March 1942, McGuire, who went by the nickname Mickey, was sent to Australia with the 49th Fighter Group. A few months into his deployment, the 475th Fighter Group was created, and he was chosen to join it as part of the 431st Fighter Squadron. Nicknamed “Satan’s Angels,” the 431st flew all over the South Pacific on missions that ranged from escorting bombers to making fighter bomber sweeps. He also helped the armorers with testing new machine guns and cannons on the P-38s.

In August 1943, McGuire got his first taste of aerial combat. Over the span of two days, he shot down five enemy aircraft while protecting bombers over New Guinea. By the end of the month, he had scored two more kills, received a Silver Star and earned three Distinguished Flying Crosses — a record made over an eight-day period that no one in Air Force history has surpassed.

During the summer of 1944, McGuire struck up a friendship with famed aviator Charles Lindbergh, who was visiting the 475th in the Pacific as a civilian consultant. According to the newspaper The Ridgewood News, McGuire and Lindbergh bunked together in a hut in New Guinea, and Lindbergh flew the occasional secret mission with McGuire in his P-38.

On Christmas Day 1944, McGuire volunteered to lead a squadron of 15 P-38s as protection for heavy bombers attacking a Japanese-held airfield over Luzon Island in the Philippines. They were on their way when the formation was attacked by 20 Japanese fighter aircraft.

McGuire repeatedly flew to the aid of his embattled comrades and drove off enemy assaults, even though he was sometimes outnumbered three to one. At one point, his guns jammed, but he continued the fight by forcing an enemy aircraft into his wingman’s line of fire. He had shot down three Japanese Zeros by the time he headed back to his base.

On the 26th, McGuire led more escort fighters on a mission to Luzon’s Clark Field, which the Japanese had taken from the U.S. when it invaded the Philippines earlier in the war. While he was trying to rescue a crippled bomber, he shot down one aircraft, then evaded four other enemy fighters, one of which he shot down. McGuire destroyed two more aircraft before the mission was over.

According to The News, a newspaper from Paterson, New Jersey, McGuire was hospitalized for three days due to injuries he suffered during those missions.

By this point, McGuire had 38 kills and was closing in on the record for aerial victories for the 5th Air Force. He was second only to Maj. Richard Bong, who had shot down 40 enemy aircraft.

McGuire hoped to add to his tally and become the No. 1 ace, so on Jan. 7, 1945, he led a group on a volunteer mission to another Japanese-held airstrip on Los Negros Island. When a Japanese Zero aircraft came toward them, McGuire had his squadron surround the Zero, which tried to get out of the snare by dropping down to 200 feet. According to the Air Force Historical Support Division, “there, the formation scattered, and the enemy plane maneuvered into position on the tail of one of the Lightnings.” McGuire came to that pilot’s rescue, but the dangerous maneuver he tried to use caused his aircraft to stall and crash.

After 325 missions, McGuire was reported as missing in action. His remains were eventually found in June 1949 in the jungles of Los Negros near a pineapple plantation. He was repatriated to the U.S. and buried in Arlington National Cemetery.

McGuire’s aerial accomplishments were honored well before that, though. On May 8, 1946, his wife accepted the Medal of Honor on his behalf from Army Gen. George C. Kenney during a ceremony in Paterson, New Jersey. That honor was added to the many other accolades McGuire had received during his career, including the Distinguished Service Cross, three Silver Stars, six Distinguished Flying Crosses and 15 Air Medals.

McGuire is still the highest-ranking American ace to have been killed in action.

Perhaps the biggest honor of his career came around the time his remains were finally found. In June 1949, the airfield at Fort Dix, New Jersey, was renamed McGuire Air Force Base. According to The Ridgeway News, a WWII P-38 was flown to the base in 1981 and resides there in his honor.