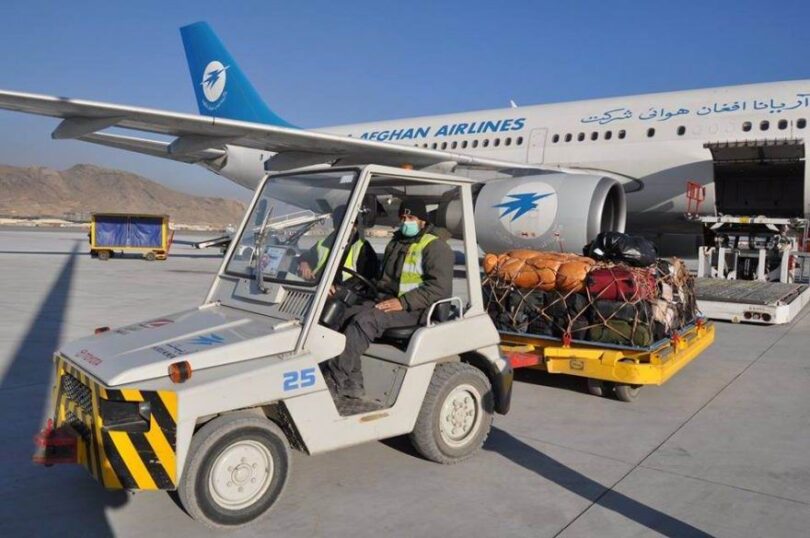 KABUL (Khaama Press): The Ministry of Finance (MoF) said the country witnessed increase in exports and imports of Afghan products through air corridors more recently.
This came a time the current leadership since the takeover last August continue to explore ways on how to stabilize and improve the economy in the Afghanistan.
Ahmad Wali Haqmal, a spokesman for the MoF, said that Afghanistan imported commodities worth 7.8 billion Afs over the past 15 months, as TOLOnews reported.
According to Haqmal, more than 4.3 billion Afghani worth of commodities has been imported into Afghanistan in over a year, making around 950 million Afghanis in revenue.
“Within the past 15 months, commodities worth 7.8 billion Afs have been imported to Afghanistan via air corridor,” he said, as local media quoted. “The Finance Ministry made 950 million in revenue from it.”
Highlighting on the types of goods exported via the air corridors, the Ministry of Industry and Commerce (MoIC) said that the commodities included carpets, pine nuts, and handmade crafts – products Afghanistan is known for.
A spokesman for the MoIC, Ahundzada Abdul Salam Jawad, said the exports have been made to China and India.
“Over the past eight months, our exports have been to China and India via air corridor,” he said, as local media quoted.
“We have had around 600 tons of exports via air corridor to China. We had around 200 tons of exports to India via a private airline company and also to other countries via Dubai, UAE,” he elaborated.
Meanwhile, Afghan traders expressed hope for the future of Afghan products in the international markets, saying exporting local product to Asian and European countries will help grow Afghanistan economy.
“The air corridor is one of the main parts of business. More exports via air corridor to India, China and the Gulf countries, as well as the EU and US, will benefit us,” said Zalmai Azimi, a trader.
Based on the statistics of the Afghanistan Chamber of Commerce and Industry, more than 5,000 tons of pine nuts have been exported via air corridor in the year 1400.
In Afghanistan, exports account for around 20 percent of GDP. Afghanistan main exports are carpets and rugs (45 percent of total exports); dried fruits (31 percent) and medicinal plants (12 percent).
Main export partners are Pakistan (48 percent of total exports), India (19 percent) and Russia (9 percent). Others include: Iran, Iraq and Turkey.