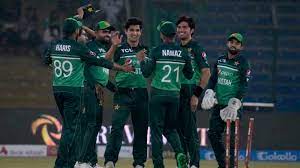 Monday’s result meant Pakistan have leapfrogged India into fourth place on the ICC ODI Team Rankings with No.1 spot now within touching distance. However, to make it happen, Pakistan will have to win on Wednesday and Friday. After Monday’s performance, Pakistan are on 110 points, while the table is still headed by New Zealand (114 points). England are second on 113 points with Australia third on 114 points.

Separately, victory in the first ODI has also put Pakistan ahead of England, Australia and Bangladesh to share second place with New Zealand on 130 points in the Super League standing. If Pakistan win on Wednesday, then they will dislodge India (139 points) from the top spot and seal a place in this year’s World Cup in India.

Naseem, playing only his fourth ODI, returned figures of 10-0-57-5 as New Zealand, put into bat, slipped from 213 for five in the 44th over to end up with 255 for nine. This was Naseem’s second successive five-fer after he had taken five for 33 against the Netherlands in Rotterdam in August last year.

The speedster, who is the youngest to take a Test hat-trick, also had figures of three for 51 and two for 27 in the other two matches in Rotterdam.

Debutant Usama Mir dismissed Kane Williamson (26) with a peach of a delivery on his eighth ball in ODI cricket and then added the scalp of Tom Latham (42) to finish with impressive figures of two for 42. Mohammad Nawaz and Mohammad Wasim Jnr took a wicket each conceding 38 and 43 runs, respectively.

For New Zealand, Michael Bracewell was the top scorer with a 42-ball 43 with four fours and a six. Together with Glenn Phillips (37), Bracewell added 66 runs in 75 balls for the sixth wicket. The other notable partnership of New Zealand’s innings was for the fourth wicket between Latham and Daryl Mitchell (36).

In the run-chase, Pakistan lost Imam-ul-Haq (11) at the score of 30 in 5.4 overs but Fakhar and Babar added 78 runs for the second wicket in 103 balls. Babar and Rizwan put on 60 runs for the third wicket in 82 balls and, Rizwan and comeback kid Haris Sohail stitched 64 runs for the fourth wicket in 51 balls to help Pakistan canter to victory in 48.1 overs.

Fakhar, world’s 11th ranked batter, struck seven fours in a 74-ball 56, number-one ranked Babar clubbed five fours and a six in an 82-ball 62, while Rizwan remained unbeaten on 77 from 86 balls with six fours and a six.

Haris celebrated his 34th birthday and return to ODI cricket since 2021 by slapping two sixes and two fours in his quickfire 23–ball 32.
Scores in brief