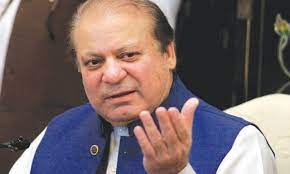 LAHORE: PML-N Quaid and former three-time prime minister Mian Nawaz Sharif has commended the names proposed by Leader of the Opposition in the Punjab Assembly Hamza Shehbaz for the caretaker CM slot.

Talking to newsmen in London on Wednesday with Maryam Nawaz besides him, Nawaz Sharif said these are good names for caretaker chief minister.

Hamza Shehbaz had written a letter to the Punjab governor in this regard.