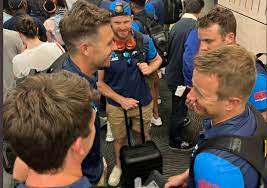 The New Zealand team arrived in Karachi from Dubai on Thursday. It took Kiwi squad 17 hours to reach Dubai.

The away Test team is led by Tim Southee and it will play two Test matches during the tour of Pakistan.