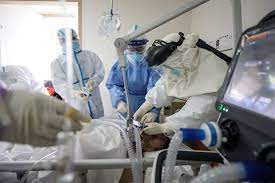 ISLAMABAD: The number of critical patients dropped as Pakistan posted 21 more Covid-19 infections with no death during the last 24 hours , showed the statistics released by the National Institute of Health (NIH) on Friday morning.

According to the NIH data, the death toll in the country remained the same at 30,640 whereas the number of total infections now rose to 1,576,147 after adding the fresh 21 cases. During the last 24 hours (Thursday), 3,627 tests were conducted throughout the country whereas the positivity ratio shot to to 0.58 percent. The number of patients in critical care stood at 09.

As Covid-19 rips through China’s vast population, making millions sick and fuelling a shortage of drugs, many are turning to old-school traditional medicines to battle the aches and pains of the virus. President Xi Jinping has promoted traditional Chinese medicine (TCM) since the start of the pandemic, while health officials have hailed its “important role” in fighting the coronavirus.

Encompassing a range of treatments from herbal remedies and massages to acupuncture and diets, TCM has been used for thousands of years to treat all manner of ailments. Critics say it is pseudoscientific and ineffective in treating actual illness, and there is little peer-reviewed data to back claims of its efficacy. But millions in China use it, often in conjunction with modern medicine to alleviate symptoms.

Beijing consultant Yu Lei, 38, had a fever after catching Covid, so he made a herbal tea with reputed anti-inflammatory properties featuring cassia twig — a kind of Chinese cinnamon — peony roots, liquorice, jujubes and ginger. “In our family, we often use Chinese medicines,” he told reporters, adding that his fever subsided after drinking the brew. According to followers like Yu, TCMs have fewer side effects and work slower to regulate the body, rather than Western medicines that “fight the symptoms but rarely the source of the illness”. (INP)