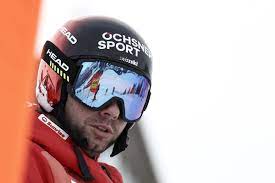 BERN (AP): Olympic downhill champion Beat Feuz announced his retirement from skiing after 16 seasons, saying Wednesday the classic events in Wengen and Kitzbuehel in January will be his last races.

“Pushing limits and risk has been my passion in skiing for years. My emotion has often been the key to success. Now my feeling tells me: the physical limits have been reached,” the 35-year-old Feuz wrote on Instagram. “I am incredibly grateful that I was able to practice my passion for so long and experience many emotional moments.”

The Swiss skier won Olympic gold in Beijing in February, adding to the super-G silver and downhill bronze medals he won in Pyeongchang four years earlier.
Feuz took the downhill title at his home world championships in St. Moritz in 2017 and won 16 World Cup races in his career, including 13 downhills.

Nicknamed “Kugelblitz” (ball lightning) in reference to his relatively small stature for a downhill skier, Feuz came back from several knee and Achilles tendon injuries to dominate the discipline between 2017 and 2021, winning the World Cup downhill season title in four consecutive seasons. He also holds the men’s record with 47 career downhill podiums.

Announcing the Jan. 21 race in Kitzbuehel, where he earned his last three downhill wins, as his last event means Feuz will not compete at the 2023 skiing world championships in France in February, the month he turns 36.

“Looking forward to spending more time with my family and excited to see what new challenges my life will bring,” Feuz said.
Feuz and his partner, former Austrian skier Katrin Triendl, have two children.