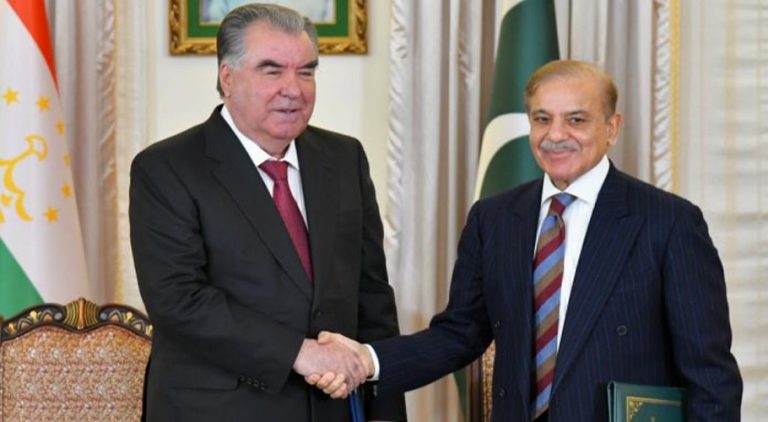 Prime Minister Muhammad Shehbaz Sharif on Wednesday said that Pakistan wanted the establishment of energy, rail, and road connectivity with the diverse energy resources-rich Central Asian Republics (CARs) for the development and prosperity of the entire region. During a joint press stakeout with President of Tajikistan Emamoli Rahmon.

Pakistan and Tajikistan have enjoyed fraternal relations over the past three decades, while Pakistan had been the first country that established ties with Tajikistan after the Central Asian Nation got independence in 1991. Both nations enjoyed multifaceted relationships in diverse fields including trade and investment, defense and security, regional connectivity, etc. Both countries inked various MoUs to enhance their cooperation in diverse fields including Transit trade, drug trafficking, energy, regional connectivity, and science and technology.

Historically, Central Asian Republics, Afghanistan, and Pakistan are tightened in multiple bonds ranging from religion to history and economy to culture and tradition. Pakistan acts as a gateway for Afghanistan and Central Asia, while both western regions connect Pakistan with a huge Euroasian economic market. After the dissolution of the former Soviet Union, multiple energy and regional connectivity projects had been conceived by the CARs and Pakistan but all those dreams could not be realized because of an unending conflict in Afghanistan.