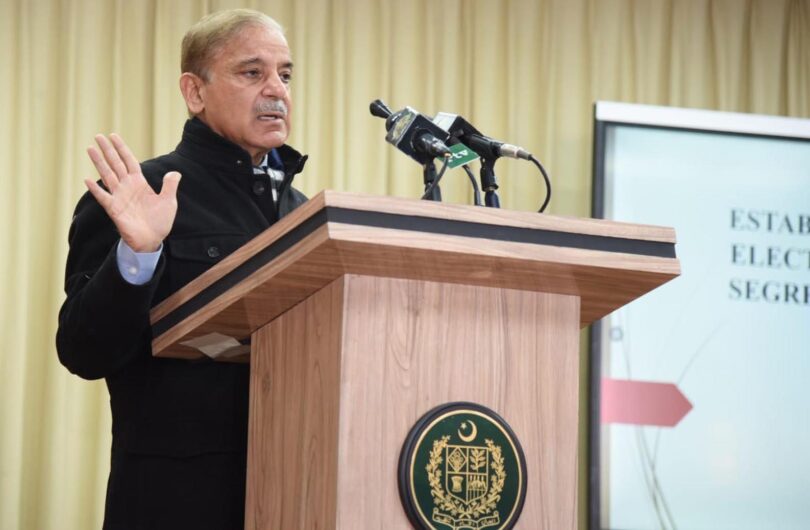 F.P. Report
ISLAMABAD: Managing Director of the International Monetary Fund Kristalina Georgieva on Friday called Prime Minister Muhammad Shehbaz Sharif over telephone, expressed her deep sympathy and concern on the human and material losses due to the recent floods and reiterated her commitment to help Pakistan in the difficult period.
The prime minister thanked the IMF managing director for her concern on the fallout of the floods and extended an invitation to her to participate in the Climate Resilient Pakistan Conference at Geneva.
Kristalina Georgieva thanked the PM for the invitation, saying she would be able to join the conference virtually as the IMF Board meetings had been prefixed for January 9 -10. The prime minister assured the IMF MD that Pakistan was committed to successfully complete the ongoing Fund’s programme. He also thanked her for her understanding and empathy of the challenges that Pakistan had been facing.
Meanwhile, Prime Minister Shehbaz Sharif appealed business community to support the government’s recently announced energy conservation plan marking the early closure of markets and restaurants, to ensure judicious use of national resources and reduce the import bill.
“I appeal to the business community to extend their support to the government (for energy conservation). This will reduce the oil import and bring down the dollar rate which would later be spent on country’s progress including agriculture and medicine,” the prime minister said addressing a ceremony for the establishment of Hazara Electric Company here. Covering a total area of over 16,774 square kilometers, the new company would cater to the needs of around 726,000 consumers across Haripur, Mansehra, Abbottabad, Battagram, Torgarh, Kohistan Upper, Kohistan Lower and Kolai Plus.
The prime minister said any difficulty faced by a nation necessitated collective action and expressed the hope that the traders from across the country would take part in this “jihad” to save the national resources. Referring to his telephonic interaction with IMF Managing Director Kristalina Georgieva, the prime minister assured that, unlike its predecessor, the incumbent government would abide by its commitments with IMF without further burdening the masses.
However, he also sensitized the IMF head over the country’s economic condition adversely affected by the worst floods and made it clear his government had already taxed the rich but could no more burden the poor. The IMF chief assured that their team would visit Pakistan for a review within two to three days, the prime minister added. Speaking highly for the Pak-China fraternal relations, the prime minister said in his meeting, the Chinese Premier Li Keqiang had also urged the IMF chief to support Pakistan considering the tough circumstances.
He also apprised the gathering of his 45-minute-long telephonic conversation with Chinese Premier in which the latter assured him not to leave Pakistan alone, which the prime minister said evidenced the improvement of bilateral relations strained by the poor foreign policy of the previous government. The prime minister criticized the previous government for undermining Pakistan’s relations with friendly countries including China, Saudi Arabia and the UAE because the ex-prime minister Imran Khan utilized most of his energies for political victimization and blaming the opponents.
The prime minister assured that the coalition government would do its maximum for the relief of the masses including the provision of jobs. He with the establishment of HAZECO, a longstanding demand of the Hazara people was fulfilled and all the formalities in this regard would be completed immediately.
He said the government had already ordered the completion of half-complete gas projects initiated in the past as billions from the national kitty were already spent. He recalled that besides launching numerous development schemes across Hazara region, ex-prime minister Nawaz Sharif had launched LNG-based power plants to inject another 11,000MW of electricity in the national grid to support the energy-scarce country. Calling Imran Khan a thankless person, the prime minister said the PTI chief had nothing to claim the credit for any development project in KP, Sindh, AJK, GB and Hazara.