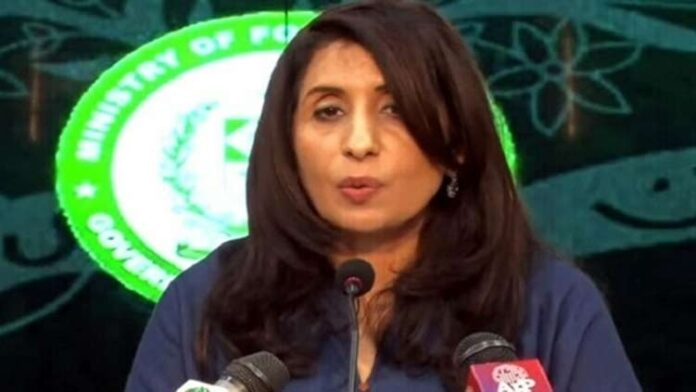 ISLAMABAD (PPI): Pakistan believes in peaceful neighborhood and reiterates that it will continue engagement with Afghanistan on different issues for regional peace and stability.
This was stated by Foreign Office Spokesperson, Mumtaz Zahra Baloch during her weekly press briefing here in Islamabad on Thursday. She said Pakistan and Afghanistan have the mechanisms of talks to resolve issues which yield positive results.
She said Pakistan is committed to countering terrorism and we will definitely defeat the terrorists again. Replying to a question, she said all required step will be taken to protect sovereignty and citizens of the country. The Spokesperson said war and instability in Afghanistan caused huge loss to both Pakistan and Afghanistan. She urged the Afghan interim authorities to revisit their decision of banning girls from education as they have full right to participate in all aspects of life.
Talking about the Foreign Minister Bilawal Bhutto Zardari’s visit to the United States, Mumtaz Zahra Baloch said it will definitely yield positive outcomes for Pakistan. She said the visit was an important step towards further strengthening Pakistan’s broad based bilateral ties with the United States. About the grave human rights violations committed by the Indian occupation forces in Indian Illegally Occupied Jammu and Kashmir (IIOJK), she urged New Delhi to stop massive human rights violations immediately. She said India must be held accountable for these injustices. The only way to lasting peace in South Asia is by granting the people of the Indian Illegally Occupied Jammu and Kashmir their inalienable right to self-determination as enshrined in the relevant UN Security Council resolutions, she said.
The Spokesperson said we are concerned over the rise of extremist nationalism in Indian and its expansionist designs for the region. She termed the reports of Bilawal Bhutto’s arrest in New York a “lie” and “contrary to facts”.
Responding to a question, she rejected the news as fake and wondered over the query on the matter from a “serious” journalist.