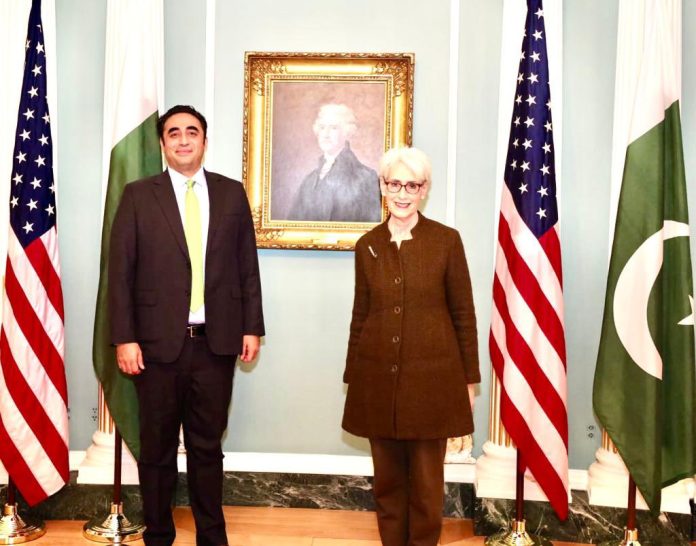 WASHINGTON (APP): Foreign Minister Bilawal Bhutto Zardari has said that Pakistan would continue working with the United States to promote peace and stability in the region.
The foreign minister expressed these views in a meeting with U.S. Deputy Secretary of State Wendy Sherman. In a tweet, Bilawal mentioned that he had a productive meeting with Wendy Sherman, where he appreciated the role of the U.S. in flood relief, rehabilitation and reconstruction. “Pakistan and the United States will continue to work together to further enhance and diversify bilateral relations, and promote peace and stability in the region,” he said.
In a meeting with Senator Chris Van Hollen, the foreign minister thanked him for his steadfast support for Pakistan.
The two sides discussed US Congress’ important role in strengthening Pak-U.S. cooperation in flood relief, rehabilitation and reconstruction.
Bilawal claims he is only FM to have borne expenses out of his own pocket: Foreign Minister Bilawal Bhutto Zardari claimed on Thursday he was the only FM to have borne expenses out of his own pocket for his foreign tours. FM Bilawal responded to a question regarding his international travels by saying, “I do not burden the national exchequer with the expenses of my abroad visits and even if I do, it is my prerogative as a foreign minister. I am the only Foreign Minister of Pakistan who purchases his own ticket and pays his own hotel bill.”
Mr Bhutto-Zardari said, “Pakistan’s citizens, not I, had benefited from my travels overseas. While the majority of people presumably travel abroad to spend holidays, Pakistan was able to remove itself from the FATF’s “grey list” because to my efforts. Pakistan is currently in charge of the G77, a global grouping of developing nations, as a result of the economic advantages of the visits.
Mr Bhutto-Zardari said, “The inclusion of disaster relief on the COP27 agenda was a major accomplishment for all developing nations, including Pakistan. It has been urged that rather than helping the rich, international financial institutions should help the less developed nations”.