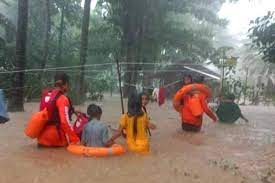 MANILA (Agencies): The death toll from flooding and landslides caused by Christmas Day rains in the southern Philippines rose to 44, with 28 others still unaccounted for, the national disaster agency said on Friday.

Damage to infrastructure and crops has been estimated at 1.36 billion pesos ($24.4 million), it said in a bulletin.

Heavy rains submerged villages, towns and highways in the Visayas and Mindanao regions on Christmas Day, forcing more than 50,000 people to flee their homes.

The floods had subsided but intermittent rains continued, the agency said.

President Ferdinand Marcos Jr. said he may visit the stricken areas to assess the situation after his scheduled trip to China from Jan. 3 to 5.

“Unfortunately, the rainfall continues. So we have to keep watching the other areas also,” a presidential palace statement quoted him as saying.