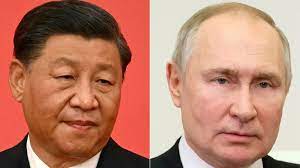 MOSCOW (Reuters): Russian President Vladimir Putin said on Friday he was expecting Chinese President Xi Jinping to make a state visit to Russia in spring 2023, in what would be a public show of solidarity from Beijing amid Russia’s flailing military campaign in Ukraine.

In introductory remarks from a video conference between the two leaders broadcast on state television, Putin said: “We are expecting you, dear Mr.Chairman, dear friend, we are expecting for you next spring on a state visit to Moscow.”

He said the visit would “demonstrate to the world the closeness of Russian-Chinese relations.”

Speaking for around eight minutes, Putin said Russia-China relations were growing in importance as a stabilizing factor, and that he aimed to deepen military cooperation between the two countries.

In a response that lasted around a quarter as long, Xi said China was ready to increase strategic cooperation with Russia against the backdrop of what he called a “difficult” situation in the world at large.

Xi told Putin that the road to peace talks on Ukraine would not be smooth and that China would continue to uphold its “objective and fair stance” on the issue, according to state broadcaster CCTV.

The relationship between Russia and China, which the two sides have hailed as a “no limits” partnership, has taken on great significance since Moscow sent its armed forces into Ukraine on Feb. 24.

Though Western countries imposed unprecedented sanctions on Russia, China has refrained from condemning Moscow’s military campaign, instead stressing the need for peace.

Russian energy exports to China have risen significantly since the outbreak of the conflict, with Russia now China’s single largest oil supplier.

However, Beijing has so far been careful not to provide the sort of direct material support that could provoke Western sanctions against China.

At a September summit in Uzbekistan, Putin acknowledged his Chinese counterpart’s “concerns” about the situation in Ukraine.