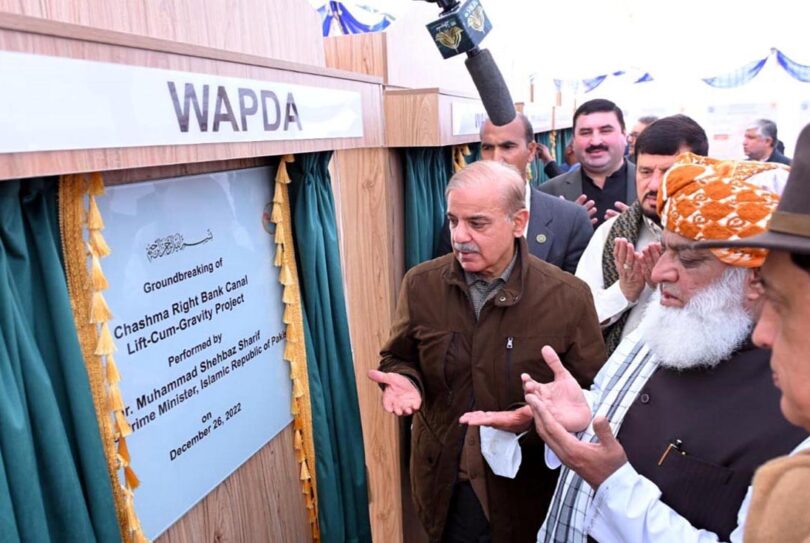 DIKHAN: Prime Minister Muhammad Shehbaz Sharif on Monday expressed the resolve that despite myriad economic challenges including the post-flood situation, the coalition government was determined to steer the country out of the current difficulties.

Addressing a ceremony after laying foundation stones of different uplift communication, road, hydel, and power infrastructure projects, the prime minister said: “These challenges might be manifold but 220 million people of the country should not get worried, the coalition government with the support of its partners will steer the country out of the challenges.”

He said for the achievement of progress and prosperity, they would have to work hard with devotion. “Nations always faced difficulties and the coalition government will put Pakistan on the path of development only through hard work,” he added.

Governor Khyber Pakhtunkhwa Haji Ghulam Ali, Minister for Planning Ahsan Iqbal, Minister for Information and Broadcasting Marriyum Aurangzeb, Advisor to PM on Political Affairs Engineer Amir Muqam, Amir of Jammiat-e-Ulema Islam-F Maulana Fazlur Rehman, relevant authorities and a large number of people were present on the occasion. The prime minister said that he had laid down the foundations for the commencement of mega-development projects in the backward areas of the southern districts of Khyber Pakhtunkhwa.

He mentioned that during his previous visits, these areas were inundated with flood water and the people of the areas had faced immense destruction, from Nowshera to Swat, Kalam, Kohistan, DIkhan and Tank districts were badly affected by floods.

Destruction in Swat was caused mainly due to man-made structures erected in the middle of the course of the river, he said, and criticized the provincial government of PTI for its flawed policies.

The prime minister sarcastically referred that the PTI provincial government always talked about the introduction of an efficient system, but the people had witnessed the crumbling of that system whereas the government’s blunders in this regard could not be neglected.

He said, however, that collective efforts were being made by all the governments to overcome the flood situation, but still different areas in Sindh were still under flood water and the people in Gilgit Baltistan were shivering from the biting cold. The prime minister said that the federal government had allocated a huge amount of Rs90 billion for the flood-affected populace and each affected family was given Rs25,000 each besides, ensuring the provision of medicine and food.

The magnitude of the disaster was huge, he said, adding, on 9 January a donors’ conference would be held in Geneva and they would remind the world that the climate-induced calamity was the result of global carbon emissions by the developed nations. Pakistan had less than one percent of carbon imprints, but it had been pummeled by the extreme weather due to carbon emissions of the developed countries, he opined.

The prime minister further assured the nation that the federal coalition government in collaboration with the provincial governments, would not rest till the complete rehabilitation of the flood-affected people.

The prime minister said that the construction of the Hakla-Yarak motorway which had hugely reduced the travel time from Islamabad to DI Khan had been conceived and implemented by former prime minister Nawaz Sharif.

He said the whole country had been connected with a network of motorways and Nawaz Sharif solely deserved credit for the launch of such mega projects, adding that he had laid the foundation stone of the last segment of the Sukkur-Hyderabad motorway section recently.
The prime minister reiterated that dream of Nawaz Sharif for a prosperous Pakistan would be fulfilled.

He regretted that during the past PTI government, all these uplift projects, initiated during the PML-N government were brought to a grinding halt. Citing the Hakla-DIKhan motorway, the prime minister said it was part of CPEC conceived in 2017, but the PTI government put these projects into cold storage, thus affecting the development and progress of the country. The prime minister also regretted that due to the faulty policies of PTI’s government, the friendly nations including China were dismayed.

In a veiled reference to former prime minister Imran Khan, he said that the PTI leader had brought disrespect to the country after selling out the precious gifts donated by foreign leaders. They gave these precious gifts as a sign of fraternal ties with the people of Pakistan, but the former ruler sold them out in open markets, he added. The prime minister said that when he had taken the oath, he did not realize the economic disaster was heading to Pakistan and that it would soon be on the verge of default, but due to the efforts of the coalition government and all other relevant institutions and prayers of the nation, they saved the country.

He said still they were faced with economic challenges. Pakistan suffered a whopping loss of about $30 billion due to floods and these woes were multiplied by global inflation and recession, the Russia and Ukraine conflict, and exorbitant price of gas and oil at the international market. He regretted that Imran Khan had no concerns for the public welfare and that his past government had never accorded any priority. The prime minister said the coalition government has still eight months’ tenure left and after that period, elections would be held in the country.

In the general elections, the public would decide, he said, whether they would vote for the man who sold precious watches and was in the habit of leveling false allegations or for those people who served them.

He further expressed the optimism that they would change the fate of Pakistan, as it was destined for fast-paced progress and prosperity.
Enumerating the uplift projects, the prime minister said that he had laid the foundation stones of different billions worth of projects including Yarak to Zhob segment, the restoration of the Chashma Right Bank Canal, restoration of its 8 power units that would generate 180MW of power, Lakki Marwat university and the dams which had been vital for the prosperity of the area.

He also directed the chairman of WAPDA to implement these hydel projects in the shortest period with a well-devised strategy.
He also cited the construction of the new airport which would provide travel facilities to the residents of the area.

The prime minister also praised the relevant institutions and the armed forces for their contributions and efforts during floods in the flood-devastated districts.

The prime minister also expressed his concerns over the rise of terrorism incidents in the province including the one in Bannu and lauded the sacrifices and successful operation launched by the special services unit and the law enforcement agencies to eliminate terrorists.
He said the security personnel who had laid down their lives for the motherland would be always remembered for their valour and bravery.

The prime minister also expressed his grief and sorrow over the loss of security personnel in Balochistan in the terrorist attack.
He informed the participants that he would be soon chairing a meeting to consider the situation.

Addressing the ceremony, Minister for Communications and Postal Services Maulana Asad Mahmood said the prime minister had restarted the journey of progress and development which was initiated by former prime minister Muhammad Nawaz Sharif and had been stalled by the former government of PTI.

Advisor to the PM Engineer Amir Muqam, in his speech, said that the construction of the motorway from Yarak to Hakla had reduced the travel time between Islamabad and the southern districts of the province.

The credit for alleviation of the sense of deprivation among the people of this area went to Muhammad Nawaz Sharif and the prime minister, he added.

He also criticized Pakistan Tahreek-i-Insaf chief Imran Khan for taking U-turns and constantly telling lies over various issues.
Amir of JUI-F Maulana Fazlur Rehman, in his address, said the prime minister’s visit to lay foundation stones of various development projects, reflected his affection for the backward areas of the province.

He highlighted the importance of the CPEC route linking DI Khan division with Gwadar and the rest of the country. The area was fast turning into a major trade and transit center for global trade, he said and stressed upon establishment of industrial zones in the area.
Maulana Fazal further said the policies of the previous government of PTI had brought the country to the brink of disaster.

Huge development projects were launched by the PML-N government, overseas Pakistanis started sending remittances, and the global partners were investing in Pakistan, but unfortunately all these hit snags in the past government’s tenure, he added.

He said the merged districts of the tribal areas required fast-paced development projects so that they could be brought at par with the other developed areas of the country.

If the available water resources in the area were fully utilized, they would turn about 1,200,000 acres of land into agrarian land, he added.
The JUI-F amir said that attempts were made to create upheaval in the country with economic uncertainty, but these would be foiled.
He said they would have to make efforts for regaining the erstwhile prestige among the comity of nations.

Maulana Lutfur Rehman, MPA, said that JUI-F had always strived for the solidarity of the country and strongly resisted and condemned any attempts to create chaos in the society. (APP)