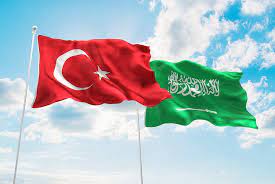 Saudi Assistant Minister for Defense, Eng. Talal bin Abdullah Al-Otaibi has recently paid an official visit to the Republic of Turkiye at the head of a high-level delegation from several agencies. According to the details, Saudi Minister met with top Turkish defense authorities and visited multiple defense installations, and production units along with holding in-depth discussions on Saudi-Turk defense cooperation and research collaboration between the two countries.

Turkey and Saudi Arabia are rapidly enhancing their bilateral relations which had been entirely scratched after the horrific killing of famous Saudi-origin US Journalist Jamal Khashoggi in the Saudi Consulate in Istanbul more than four years ago. Meanwhile, Ankara’s support to Doha during the years-long Gulf crisis was another reason that the Saudi-led Gulf bloc separated its way from Turkey and pushed Anakara into regional isolation, the gap Erdogan filled with frequent tours to Islamabad, Baku, and Kuala Lumpur over the past year. However, Biden’s betrayal of Riyadh and Ankara’s growing economic crisis compelled both nations to take benefit of each other specialties in defense and economic sectors. Currently, the Saudi Crown Prince has much interest in the Turkish defense industry, Turkish state-of-the-art armed drones, helicopters, and Naval warships whereas Erdogan’s eyes on the lucrative Middle East oil market and economic investment by Riyadh, UAE, and Kuwait, which can easily rescue Ankara out of the current economic fiasco.

In fact, the Turk-Saudi ties were fully reset and normalized during Crown prince Muhammad Bin Suleman’s visit to Ankara a few months back while the recent visit of the Saudi Assistant Defense Minister aimed at implementing the decisions taken during the visit of the de facto ruler of the Kingdom. Currently, Saudi Arabia intends to enhance its defense cooperation through the procurement of the latest Turkish arsenal to counter Houthis’ threat and also seeks defense and security collaboration with Turkey to strengthen its defense capabilities and attain self-sufficiency in the defense sector. Hopefully, Turk-Saudi cooperation would have far-reaching effects on peace and strategic stability in the broader Middle East region in the coming years.