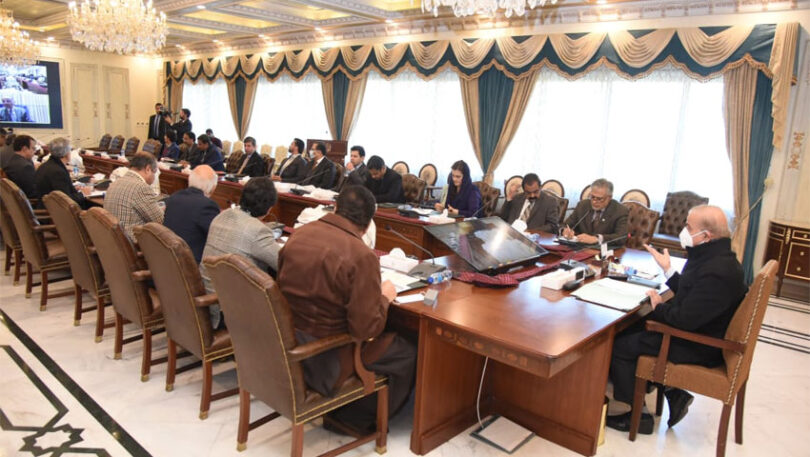 ISLAMABAD (INP): Prime Minister (PM) Shehbaz Sharif has directed to expedite the implementation of the Kissan Package.
He was chairing a review meeting on the historic Kissan Package given by the government for the development of the agricultural sector, here on Wednesday.
The prime minister said that we have to ensure food security in Pakistan at all costs. He said the development of the agriculture sector is the guarantor of food security in Pakistan.
PM Shehbaz Sharif directed that special attention should be paid to the cultivation and production of wheat, cotton, canola and olives for food security in the country.
Moreover, the farmers should be ensured the supply of better seeds to increase the production of other food grains including pulses.
The meeting was informed that instructions have been issued for the implementation of Kissan Package, youth loan scheme, interest waiver for small farmers and provision of interest-free agricultural loans to small farmers in flood-affected areas through State Bank notification to banks. It was informed that in the current financial year till November, agricultural loans of 664 billion have been distributed to farmers, which is 36 percent higher than the same period of the previous financial year.
PM sets up committee to reduce electricity use in govt offices: Prime Minister Shehbaz Sharif has formed a committee to work on reducing electricity consumption in government offices by 30 percent.
The prime minister gave this approval while chairing a federal cabinet meeting here in Islamabad.
According to the statement, the committee comprise federal ministers from energy, planning, Petroleum and relevant secretaries.
The federal cabinet discussed the ‘Proposed Energy Saving Plan’ presented by the Power Division. The meeting was briefed on the consultation conducted so far with the stakeholders regarding the energy-saving plan. In this regard, the prime minister said that the consultation process with all the stakeholders including the provincial governments, Azad Jammu and Kashmir and Gilgit-Baltistan governments should be completed as soon as possible to ensure the implementation of the proposed ‘Energy Saving Plan’.
He said the implementation of the energy saving plan and the use of alternative energy was indispensable to reduce the import bill in terms of fuel. The federal cabinet also condemned the arrest of senior parliamentarian Chaudhry Ashraf by the Punjab government in a 53-year-old case as a step of political vendetta.
The federal cabinet paid tribute to the security forces for their continuous fight against terrorism.
PM accuses PTI of ‘criminal negligence’ over failure to buy cheap gas, oil: Prime Minister Shehbaz Sharif said on Wednesday the Pakistan Tehreek-e-Insaf (PTI) government showed criminal negligence by not buying cheap oil and gas. Federal Defence Minister Khawaja Asif briefed the federal cabinet on coordination with provinces about the proposed energy plan, while officials of the power division briefed the cabinet on the implementation of the plan. Sources said Prime Minister Shehbaz Sharif stressed that dependence on renewable and cheap sources of energy was the need of the hour as the annual import bill of just oil and gas is $27 billion, while the country s circular debt has reached Rs2.5 trillion.
The premier further said no reforms were made in the energy sector in the past three decades; however, the coalition government was trying to address the country s problems