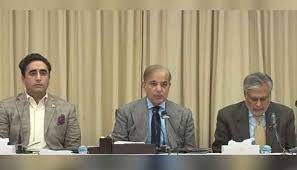 ISLAMABAD: Prime Minister Shehbaz Sharif has congratulated the nation on the success of Geneva Conference in which donors have pledged $9.7 billion for the flood victims of Pakistan.

Shehbaz Sharif said “It is now up to Pakistan itself. The balls is now in Pakistan’s court after securing billions of dollars.”

He said success of Geneva moot was the result of the prayers of 220 million people of Pakistan. He resolved to continue efforts for the complete resettlement of the flood affectees.

He said his opponents launched a propaganda against the government. They tried to create a rift among different sections of society.

He said the global aid reflects world’s trust in the Government of Pakistan.

Alluding to one billion dollar pledge made by Saudi Arabia, he said the fraternal country always stood by Pakistan in difficult times.

He vowed that the aid would be spent in the most transparent manner and each and every penny would be spent on the welfare of flood-hit people and flood-ravaged areas.

“We will not disappoint the nation and each penny will be utilized in a transparent manner for rehabilitation of the flood affected people and reconstruction of damaged homes and other infrastructure including roads and bridges” he added.

Prime Minister Shehbaz Sharif emphatically stated that the reconstruction and rehabilitation of flood-affected areas would be made a successful model by ensuring complete transparency in utilization of funds pledged at the Climate Resilient Pakistan Conference in Geneva.

The premier said the process of third-party validation would be pursued for this purpose which would send a strong message to donors and lenders.

He expressed his resolve that no effort would be spared to achieve our reconstruction targets as best as possible. He said modern technology and methods would be used to ensure a robust and resilient infrastructure.

Describing the pledges of 9.7 billion dollars made by the friendly countries and financial institutions at Geneva Conference as a big achievement, the Prime Minister said this is also manifestation of the confidence and trust of the world community in the people and coalition government of Pakistan.

He said if the international community would have any doubts or given ears to the propaganda of our opponents, they would have not pledged this huge amount.

He said the whole world saw itself the expression of solidarity, brotherhood and unity on the part of Pakistan at Geneva moot.

He said the provinces were taken along which presented their case at the conference.

Shehbaz was highly appreciative of the support announced by the friendly countries at the moot.

In his remarks, Foreign Minister Bilawal Bhutto Zardari said Geneva Conference proved to be the success of our foreign policy, dispelling the impression that Pakistan is isolated.

He said we had targeted to raise $8 billion from the conference, but we surpassed this target, which is a befitting response to the negative propagandists.

Bilawal said we will also have to manage 50 percent from our own resources for the reconstruction and rehabilitation phase, appealing to the people to come forward for the humanitarian assistance of flood victims, who are still braving extreme weather conditions under the open skies.

The foreign minister assured the flood affected population that their recovery and rehabilitation is the mission of the government.

Responding to a question, Prime Minister Shehbaz Sharif dispelled the impression that the federating units were not on board regarding the Geneva Conference.

He once again thanked the UN secretary-general for forcefully pleading the case of Pakistan at Geneva conference.

About his upcoming visit to United Arab Emirates, Shehbaz Sharif said he is visiting UAE tomorrow and expressed the confidence that it will help further augment bilateral relations between the two countries.

To a question about security situation, Pm Shehbaz said maintaining law and order situation is a joint responsibility of federal and provincial governments. He said we are cognizant of our responsibilities and these will be fulfilled with firm commitment.

Speaking on this occasion, Finance Minister Ishaq Dar said timeframe of three years has been set for the reconstruction phase.

He said both the federal and provincial governments from their development budgets will also contribute funds for this purpose.

Dar revealed that $8.7bn of the pledges were project loans — the terms of which are not clear.

He explained that the project loan financing had already crossed $8bn, which included commitments from the Asian Development Bank, the Asian Infrastructure Investment Bank, and the World Bank.

As regards economic situation of the country, Dar said that a detailed meeting has been held with the IMF.

He said Pakistan faces no threat of default and there is nothing to worry. He said all the external debt liabilities will be made on time.