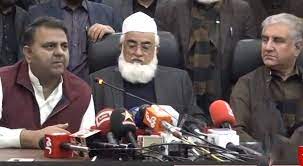 Mr Shah, who has served as minister of state for Religious Affairs and Interfaith Harmony during the previous tenure of PML-N government from 2013-18, announced his decision at a press conferece along with PTI s top leadership – Shah Mahmood Qureshi, Asad Umar and Fawad Chaudhry – in his hometown, Bhera. A huge number of his followers has also joined the PTI.

Speaking on the ocassion, Mr Qureshi said: “I welcome Pir Aminul Hasnat to PTI,” adding that his inclustion with further strengthen the party ahead of general elections.

Fawad Chaduhry said the Hasnat s decision had wiped out the PML-N from Sargodha. He reiterated that economic stability was linked to the political stability and called for early polls in the country.

The development would be blow to the PML-N as general elections are scheduled to be held later this year as tenure of the current National Assembly ends in August.

Earlier in the day, Fawad Chaudhry, in a tweet, termed the Mr Hasnat’s decision to join PTI “very important”. He said “Pir Sahib” and his family had influence in all over Pakistan, including Sargodha and Rawalpindi division.