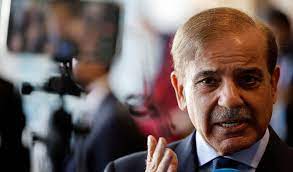 F.P. Report
ISLAMABAD: Former Vice President of FPCCI Atif Ikram Sheikh on Sunday lauded the resolve of Prime Minister Shahbaz Sharif to meet International Monetary Fund (IMF) conditionalities.
Prime Minister has expressed resolve to complete the terms of the IMF Extended Fund Facility programme which is a step in the right direction as it will subside anxiety in the market, he said.
Atif Ikram Sheikh who has also served as Chairman of PVMA said that the PM has assured the Managing Director of the IMF to complete the terms of the IMF’s program and explained Pakistan’s economic difficulties after the devastating floods.
IMF delegation will come to Pakistan soon which is also a piece of good news which will tackle fears among the investors and masses as some elements are busy spreading rumours about default, he added.
Pakistan entered a $6 billion IMF programme in 2019, which was increased to $7 billion last year. The programme’s ninth review, which if completed successfully, would result in the release of $1.18bn to Pakistan.
The review is currently pending as the government did not comply with the agreement which prompted IMF to suspend the tranche.
The IMF review has earlier been put off for two months due to the PML-N-led government’s unwillingness to accept certain conditions placed before it by the Fund, and the disagreements have yet to be resolved.
The business leader said that the international community seems unconcerned about the plight of people in Pakistan hit by floods.
Large parts of the Sindh and Balochistan provinces remain inundated. The number of food-insecure people in Pakistan has doubled to 14 million and another 9 million have been pushed into extreme poverty.
These flooded areas now look like permanent lakes, transforming forever the terrain and the lives of people living there. No amount of pumps can remove this water in less than a year.
Pakistan is suffering not just from flooding but from recurring climate extremes. In spring 2022, the country was in the grip of a scorching, drought-aggravating heat wave that caused forest fires. The fact that some of the same areas that received record temperatures were subsequently submerged shows sharp swings in weather patterns that are becoming a norm.
Pakistanis have responded to this latest calamity with resilience despite facing severe economic headwinds.