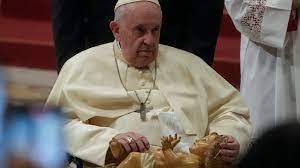 VATICAN: Pope Francis has decried human “hunger for wealth and power” in his Christmas message, apparently referring to the war in Ukraine and other conflicts.

According to the BBC, Pope Francis said: “How many wars have we seen … and the main victims are the weak and vulnerable.”

“I think above all of the children devoured by war, poverty and injustice,” the pontiff added.

He was addressing worshippers at St Peter’s Basilica in Vatican City. It was the first with a capacity crowd of about 7,000 following several years of restricted attendance because of COVID.

Francis is celebrating the 10th Christmas of his pontificate.

Francis, 86, entered the church in a wheelchair, and sat at the site of the altar for most of the Mass on Saturday evening.

“While animals feed in their stalls, men and women in our world, in their hunger for wealth and power, consume even their neighbours, their mothers and sisters,” he said.

He did not specifically mention the Russian-Ukraine war during the service.

During the early stages of Russia’s full-scale invasion launched on 24 February, the Argentine pontiff was widely criticised in Ukraine for making what many Ukrainians saw as cautious comments, without blaming Russia directly.

In June, he suggested that the war was “somehow either provoked or not prevented”.

But the Pope later denounced what he described as atrocities committed by Russian troops.

Later on Sunday, Francis is due to deliver his traditional Urbi et Orbi (to the city and the world) blessing and message from St Peter’s Basilica’s balcony to Catholics in the square below and around the world.