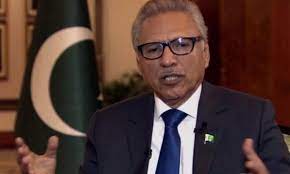 ISLAMABAD: President Dr Arif Alvi has stressed upon the nation to renew its journey of transforming Pakistan into a peaceful, prosperous and welfare Islamic state on the basis of golden Islamic democratic tenets.

Felicitating the Pakistani nation and the international community on the arrival of new year 2023, the president prayed for the peace, progress and prosperity of the motherland, entire Muslim Ummah and the world.

The president recollecting the past year’s challenges confronted by the Pakistani nation including Covid 19 pandemic and floods, said that they had surmounted all those issues by virtue of their hard work, valour, sacrifices, resolve and determination.

After containing the coronavirus pandemic, huge areas of Pakistan were inundated by historic floods, he said, adding that during the floods, he had undertaken visits to the affected areas and reviewed the losses. In those areas, he also met with the flood affected people and heard their issues, besides everywhere, he witnessed ordeals and the damages,, President Secretariat Press Wing said in a press release.

The president said that he not only came across such a vast devastation, but also witnessed the determination, sacrifices, unity, patriotism and resolve of the nation.

The president underlined that they would have to utilize their capabilities to steer Pakistan out of the challenges and putting it on the path of progress and development. The country was being faced with host of challenges like economic, political instability, law and order, rising specter of terrorism, climate change, poverty and the increasing population.

In the new year, the nation, in unison, has to set its priorities to overcome these problems. “We have to work with national solidarity, unity, discipline, continuous struggle, passion and devotion for making Pakistan, a prosperous, developed, democratic and stronger country,” he added.

The president said that the new year also required that they should ensure enhanced efficacy and performance of the democratic institutions for a stronger and stable Pakistan.

He also stressed upon the need of capacity building of the institutions and entities by introducing reforms in the relevant laws and rules, adding for the national development, all the stakeholders have to take the practical steps for upholding the constitution, ensuring provision of justice, transparency, capacity building, meritocracy, and resolution of the public grievances.

The president also called upon acceleration of efforts for complete rehabilitation of the flood affected people and for bringing the weaker segments of society out of poverty.

A society could not be completed and established without the inclusion of persons with disabilities and womenfolk in the mainstream of business and other social activities, he added. The president also underpinned adoption of habits to conserve and utilize the natural resources and energy with responsibility and emphasized upon the need of focusing on development of human resources and education. (APP)