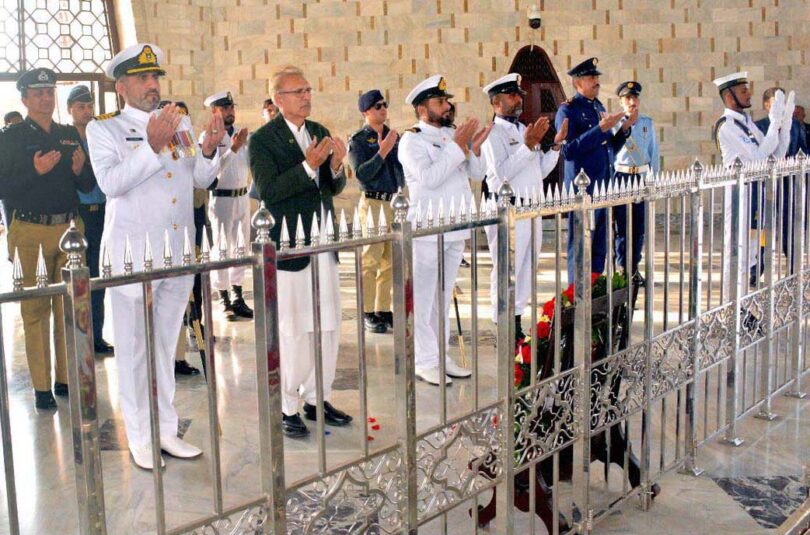 Karachi: President Dr. Arif Alvi visited mausoleum of father of the nation Quaid-e-Azam Mohammed Ali Jinnah and paid rich tributes to him on his 146th birthday anniversary on Sunday. The president also laid a wreath and offered fateha at Mazar-e-Quaid. The president also prayed for the development and prosperity of the country. He, later, inked his impressions in the book of visitors.

While talking to media persons, he said that the nation should follow the guiding principles of father of the nation Quaid-e-Azam Muhammed Ali Jinnah for development of the country. He said that the Quaid had already known about the discriminatory behaviour of dominant majority in subcontinent with the minorities including Muslims.

He said, ‘We have to pursue Quaid’s guiding principles for development of the country.’ He advised the nation to follow Quaid’s principle unity, faith and discipline. He said that their real destination was to develop the nation as per Quaid’s vision.

Meanwhile, President Dr Arif Alvi has urged the children to gain knowledge, focus on their character development, uphold morality and truth, and act upon Quaid-e-Azam’s principles of “Unity, Faith and Discipline” to make Pakistan a strong and prosperous nation.

Addressing the ceremony, the President said that freedom was not easy to achieve or maintain, and children and the youth of the country should play their role to protect this freedom while maintaining unity, faith and discipline in their ranks and striving to make this country a great nation with dedication, commitment and selfless effort.

He said that Pakistan was destined to become a great nation and to achieve this we should act upon the golden principles laid down by our Founding Father, Quaid-i-Azam Muhammad Ali Jinnah, for making this country strong and prosperous and focusing on education and proper upbringing of our children and future generations.

The President said that although the country was facing economic difficulties, however, we can progress by taking the right decisions at the right time and re-modelling our lives on the cherished moral and ethical values of Islam, sayings and the principles laid down by the Quaid, and working with unity and devotion.

The President quoted various incidents from the life of Quaid-e-Azam Muhammad Ali Jinnah which reflected his love for children. He said that Quaid-e-Azam used to reply to letters written by children to him, adding that children too played their role in Pakistan Movement and set examples by sending donations to Quaid-e-Azam for the Muslim League through their pocket money.

The President also referred to various sayings of the Quaid for youth and children. He quoted Quaid’ saying “My young friends, I look forward to you as the real makers of Pakistan, do not be exploited and do not be misled. Create amongst yourselves complete unity and solidarity. Set an example of what youth can do. Your main occupation should be in fairness to yourself, to your parents, in fairness to the State, to devote your attention to your studies. If you fritter away your energies now, you will always regret.”

He also quoted Quaid’s saying “You must concentrate on gaining knowledge and education. It is your foremost responsibility. Political awareness of the era is also part of your education. You must be aware of international events and the environment. Education is a matter of life and death for our country.” He urged young children and students to devote themselves to their studies and parents to devote themselves to children’s education and proper upbringing.

The President said that even the political opponents of Quaid used to appreciate his truthfulness and strength of character and adherence to principles. He said that in order to make Pakistan a developed country, we need education, knowledge and skills and once we would become economically strong, our country’s defence and security would also be assured. He said that the children and the students should focus on gaining modern and highly critical knowledge and skills to remain abreast to compete with modern-day challenges.

Earlier, the children paid tribute to Quaid-e-Azam through speeches and shed light on different aspects of Quaid-e-Azam’s life and his love for youth and children. Children with disabilities and students from different schools of Islamabad gave cultural performances and performed medleys highlighting the cultural diversity of the country and paid rich tribute to the Founding Father of the nation. (APP)