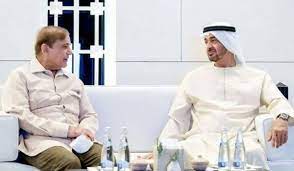 This great leader was very fond of Pakistan. He took a personal interest in many socio-economic projects in Pakistan and provided opportunities for Pakistani workers to work in the UAE – serving as a strong bridge between Pakistani workers, Pakistan and the UAE.
His successors in the UAE are following the high standards set by Sheikh Zayed and are striving to further strengthen and stabilize relations with Pakistan. The Prime Minister’s visits have further expanded our bilateral relations, our trade and economic ties have also strengthened and we continue to cooperate at international forums.

Economic and trade relations between Pakistan and the United Arab Emirates are an important part of our bilateral relations and are continuously growing.

With mutual trade of over $8 billion, the UAE is Pakistan’s largest trading partner in the Middle East and North Africa region. It is one of the largest foreign investors in Pakistan.

With the continuous progress of the China Pakistan Economic Corridor and the operationalization of the Gwadar port, Pakistan is poised to connect the Middle East with Afghanistan and beyond with Central Asia. Better connectivity between our regions will be very beneficial for our people.

The UAE is home to around 1.7 million Pakistanis who have been contributing to the success of the UAE for the past five decades, as well as the development, prosperity and economic growth of the two brotherly countries. Pakistan and the UAE are bound by close and brotherly ties based on common faith and traditions, common history and heritage. Regular high-level exchanges and visits by the leaders of the two countries are an important feature of the bilateral relationship.

It should be noted that Pakistan and the United Arab Emirates are enjoying deep, strong and religious relations with strong values.
Pakistan is committed to further expand and strengthen bilateral relations with the UAE, particularly in the areas of trade, economy and investment.

Pakistan is committed to further expand and strengthen bilateral relations with the UAE, particularly in the areas of trade, economy and investment. During the visit, the Prime Minister will meet the President of the United Arab Emirates, Sheikh Mohammed bin Zayed Al Nahyan, to promote economic, trade and investment relations between the two brotherly countries and create opportunities for the Pakistani workforce in the UAE. The two leaders will also discuss several regional and global issues of mutual interest.

It should be noted that since Mian Shahbaz Sharif assumed the position of Prime Minister of the coalition government, he has worked day and night for the restoration of the country’s economy. A clear example of this is the recent Geneva conference in which more than expected funds have been pledged for flood relief. Apart from this, a positive discussion has also been held with the representatives of the IMF and now the danger of Pakistan defaulting has been avoided, but still more tough decisions have to be made. Pakistan’s stock exchange has also improved.

In this context, the spokesman of the Foreign Office says that Prime Minister Shehbaz Sharif is visiting on the invitation of the head of the UAE. Pakistan is committed to further expand and strengthen bilateral relations with the UAE, particularly in the areas of trade, economy and investment.

It should be noted that ever since Mian Shahbaz Sharif assumed the position of Prime Minister of the coalition government, he has worked day and night to revive the country’s economy. During the visit, the Prime Minister will meet the President of the United Arab Emirates, Sheikh Mohammed bin Zayed Al Nahyan, and will discuss bilateral relations and trade issues in meetings with the UAE leadership. The meeting will also discuss progress in investment agreements in Pakistan.

Relations between Pakistan and the United Arab Emirates began in 1971 after the settlement of Abu Dhabi.

Even today, more than 1.8 million Pakistanis are associated with various sectors there. Pakistan and the United Arab Emirates have very close trade relations, which is reflected in the fact that the UAE is the fourth largest investor in Pakistan.
Apart from this, UAE is working in the field of education, health, water resources and infrastructure under the Pakistan Assistants Program.

In 2009, after the attack on the Sri Lankan cricket team in Lahore, the doors of international cricket were closed to Pakistan and foreign teams stopped coming to Pakistan. During this difficult time, UAE supported Pakistan and Pakistan used the sports grounds of UAE as their home ground.

The relationship of friendship between UAE and Pakistan is 51 years old. It is hoped that the visit of Prime Minister Shehbaz Sharif will further strengthen the relationship.