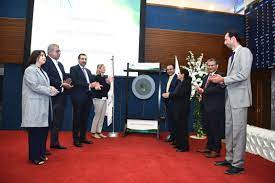 ISLAMABAD: In a landmark development for the capital market, Pakistan Stock Exchange (PSX) signed an agreement with Karandaaz whereby Technical Assistance (TA) grants would be given to prospective companies to be listed on the Gem Enterprise Market (GEM) Board.

In an effort to promote the GEM Board to eligible SMEs, PSX approached KRN to facilitate small businesses in raising much needed capital for the growth of their business.

With the signing of this Agreement, the PSX and KRN have joined hands to aid the eligible small to medium growth enterprises in their quest to list on the GEM Board by making grants available to them.

Hence, this will reduce the cost of raising capital for these companies, he said adding the agreement was the culmination of the joint initiativeof PSX and KRN to promote and support the SMEs to raise capital and grow their businesses by listing on the GEM Board.

He said, the signing of the agreeement was a harbinger of what’s to come in the growth story of the GEM Board, its listed companies and the capital market as a whole.

The CEO of Karandaaz, Waqas ul Hasan, highlighting the role of Karandaaz in SME financing and the importance of the partnership between Karandaaz and PSX on opening financing opportunities for businesses.

He said, Karandaaz mission was to foster economic growth and create jobs through financial inclusion of unbanked individuals and unserved enterprises.

It has provided financing to 850,613 MSMEs through various financing instruments, resulting in supporting 1,006,930 jobs, and cumulatively generated an incremental revenue of PKR 199 billion for these MSMEs.

Speaking on he occasion, Jo Moir, Development Director at the British High Commission, said that the UK government had been pleased to support the initiative through Karandaaz, adding the GEM project allows SMEs access to finance on the capital markets, enabling them to grow and fulfil their potential.

In her concluding remarks, the Chairperson of KRN and PSX, Dr. Shamshad Akhtar said that KRN brought to PSX its a unique edge and potential to unlock GEM challenges as it has evolved a broad based eco system and SME finance institutional architecture and PSX over the last year succeeded in operationalizing its GEM Board as tested by listing of few companies.

Moving forward, grant support of KRN to position enterprises for listing will open avenues for equity and debt, she said adding the listed companies would be elevated to an exclusive league within the SME segment that have demonstrated institutional maturity and ambition and prospects for growth.” (APP)