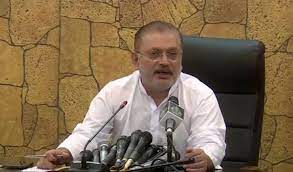 F.P. Report
HYDERABAD: The Sindh Minister for Information, Transport and Mass Transit Sharjeel Inam Memon said that now a days there was a trend of fake news in the country and false news was spreaded in such a way that it seemed to be true. He said that in a recently published article, false news was spreaded against the former President of Pakistan Asif Zardari that under NRO all his cases had been transferred from Rawalpindi to Karachi which was baseless as his all cases were being heard in Rawal Pindi and none of the cases had been transferred to Karachi.
He was talking to media persons on the reception given by him to newly-elected office bearers and members of governing body of Press Club Hyderabad at Rawal House, Hyderabad on Monday. He said that they (PPP) did not make any kind of deal and if there was a deal then cases of PPP leadership and its workers would have been closed.
He said that the PDM was formed by the People’s Party and it was a good decision by not resigning at that time, otherwise Imran Niazi would still be the Prime Minister. He said that Fawad Chaudhry had accused him and Nasir Shah of horse trading, ” I have not spoken to any member of PTI”, he said. He said that PTI had always done the politics of lies, this was also a fake news and added that PTI’s job was to blame people. He said that the audio leak had come in which Imran Khan was saying that five members were bought. He said that the rehabilitation work of the flood victims had been started and the construction of the houses of the victims would be started very soon.
Sharjeel Inam Memon said that the People’s Party was always ready for the local body elections. He said that for the first time in the country’s history, two million families affected by the flood/ rains would be given money to build their own houses while farmers who cultivated wheat in the flood-affected areas were being given Rs 5,000 per acre.
He said that people’s crops were destroyed and food and drinking items were all gone and the Sindh government immediately provided cooked food to affected people. He said that Sindh was the only province where flour was being sold on official price of Rs 65 per kg while the wheat imported by the Federal government and PASCO was Rs 9000/- . Press Club’s newly-elected President Lala Rehman Samoon, General Secretary Hameedur Rahman, Ali Hassan, Muhammad Hussain Khan and other members of the governing body were also present on this occasion.