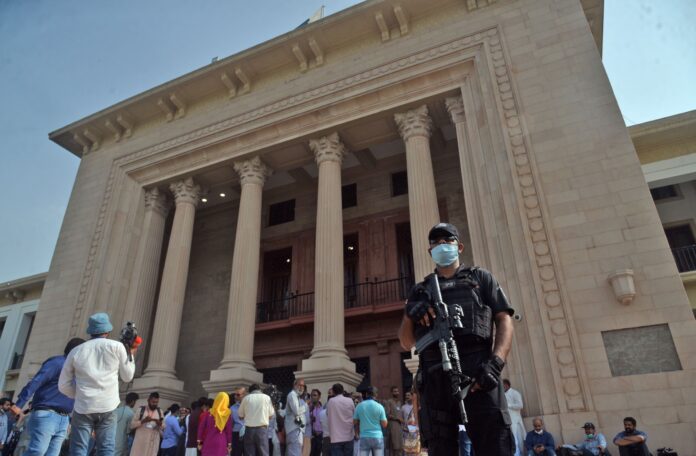 LAHORE (INP): As the Punjab Assembly automatically stood dissolved late on Saturday, now for the caretaker set-up, both the PTI-PML-Q alliance and the opposition PML-N will have to float two names each after formal consultations. If both sides do not reach a consensus on the subject, the matter will go to the Election Commission of Pakistan that will make the appointment.
As the Punjab Assembly automatically stood dissolved the PTI concluded a series of hectic meetings deliberating its political strategy and finalizing candidates for the slot of caretaker CM, to be appointed in consultation with the outgoing assembly’s opposition leader.
PTI Chairman Imran Khan, in a meeting with senior party leaders, is said to have finalized the candidates to be proposed for the caretaker CM. However, at the eleventh hour, the party decided to hold onto the names for another day as Mr Khan is scheduled to present them to outgoing CM Parvez Elahi in a formal meeting at his residence.
CM Elahi and Opposition Leader in the Punjab Assembly Hamza Shehbaz are now required to consult and mutually decide a candidate to propose for appointment as the caretaker CM within the next three days.
Punjab Assembly Speaker Sibtain Khan had earlier claimed the PTI had finalised three names to be suggested for the caretaker chief minister’s post. Those names would be shared soon after the dissolution of the assembly.
In the meeting with senior party leaders at his residence, PTI chief Imran Khan deliberated and reportedly finalized the candidates for the interim chief’s slot.On the other hand Governor Balighur Rehman wrote to CM Elahi and Opposition Leader in the PA Hamza Shehbaz, saying: “The provincial assembly of Punjab and cabinet stand dissolved under Article 112(1) of the Constitution on Jan 14. The caretaker chief minister shall be appointed by the undersigned in consultation with the outgoing chief minister and the leader of the opposition in the outgoing provincial assembly as per Article 224(1A) of the Constitution.”
He also invited both sides to participate in the process of appointment of an interim CM and provide names of their nominees for the purpose within three days (by Jan 17). He also offered to meet with Mr Elahi and Mr Shehbaz on the matter, if both leaders wished.
Hamza has been out of the country for over a month and his party is still not sure when he will return. “If Hamza does not return from the US, he may become a part of the consultation on the appointment process from abroad,” a PML-N leader told.