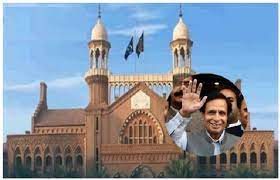 LAHORE (INP): The Lahore High Court (LHC) on Wednesday resumed hearing on Punjab Chief Minister Pervaiz Elahi’s plea challenging Governor Balighur-Rehman’s order to de-notify him as CM. A five-member bench comprising Justice Abid Aziz Shaikh, Justice Chaudhry Muhammad Iqbal, Justice Tariq Saleem Sheikh, Justice Asim Hafeez and Justice Muzamil Akhtar Shabir took up Elahi’s plea.
During today’s proceedings, Elahi’s lawyer Barrister Ali Zafar argued that the governor cannot ask CM to take trust as his rights are limited. At this, Justice Asim Hafeez remarked that the governor can ask a chief minister to take a vote of confidence from the assembly. “Chief minister should always have the support of 186 members.”
As the hearing went underway, Justice Abid Aziz Shaikh remarked that the vote of trust matter had not yet been solved. “This issue will only be resolved once CM Perviaz Elahi takes the vote of confidence,” the governor’s lawyers said, adding that Elahi had a lot of time to take the trust vote after the previous hearing but he did not do it. At this, Justice Shaikh turned to Elahi’s lawyer and asked: “How many days will be suitable for you to take the vote of confidence? We will fix a time accordingly and your problem will be solved.” Last month, the governor had de-notified CM Pervaiz Elahi in the wee hours of December 23, 2022, for failing to take a vote of confidence from the provincial assembly.
In his order dated Dec 22, the Punjab Governor Baligh-ur-Rehman stated that Punjab CM Pervaiz Elahi and his cabinet were constitutionally made inactive for not seeking the vote of confidence from the provincial assembly. The Punjab governor stated said since CM Pervaiz Elahi had refrained from obtaining the Vote of Confidence at the appointed day and time therefore he ceases to hold office.
A very next day, Chaudhry Pervaiz Elahi moved Lahore High Court (LHC) against Punjab Governor Baligh-ur-Rehman for denotifying him as Punjab’s chief minister. In a petition, filed through his lawyer, Elahi, argued that the Punjab governor did not fulfil the constitutional requirement and ordered a vote of confidence during the ongoing session of the Punjab Assembly. The petition maintained the governor did not authorise to summon assembly session when the current session was already underway.
Pervaiz Elahi pleaded with the high court to declare the governor’s order “null and void”. At the previous hearing, the Lahore High Court (LHC) had restored Punjab Chief Minister Pervaiz Elahi and the provincial cabinet after suspending the governor’s denotification order. Barrister Ali Zafar on behalf of Pervaiz Elahi, Nasr Ahmed on behalf of the federal government and Khalid Ishaq on behalf of Governor Punjab presented their arguments.
The lawyer representing Punjab CM, Ali Zafar, pleaded with the LHC bench to give direction after nullifying the governor’s denotification order. To this, the LHC judge remarked that the court wants to maintain a balance to make things better. The judge questioned how an interim relief would be granted if assurances are not being given to the court. “We would restore the cabinet but you will need to give an assurance that our order will not be misused. We can give you more time. How can we stop the constitutional process of the dissolution of the assembly? However, we want to stop creating such a situation.”
The LHC adjourned the hearing for an hour after ordering CM’s lawyer to submit an affidavit to give assurance to not dissolve the Punjab Assembly. After the hearing resumed, Pervaiz Elahi submitted the affidavit to assure that he will not advise the Punjab governor the dissolve the provincial assembly.