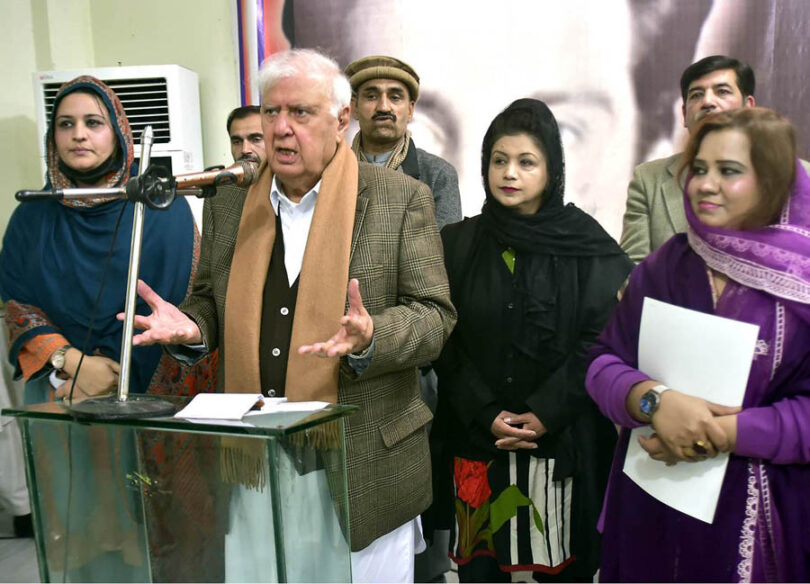 F.P. Report
PESHAWAR: Qaumi Watan Party (QWP) Chairman Aftab Ahmad Khan Sherpao on Sunday criticized the Pakistan Tehreek-i-Insaf (PTI) for staging protests against spiraling inflation and said the recent price-hike was the result of the wrong policies of the previous government.
He stated this while speaking at a gathering in Watan Kor where scores of women political workers announced joining the QWP. “It is ironic that the ones whose flawed policies caused inflation are now protesting against it,” he remarked.
He said the PTI could not deceive the people through such tactics.
He said PTI leader Imran Khan must face the reality and accept his failure instead of blaming others. He said the economic situation started worsening during the PTI government due to its incompetence.
Aftab Sherpao said the PTI had pushed the country towards bankruptcy and its leaders were now bent on creating anarchy, which was not good for the economy. He maintained that political stability was a prerequisite for a strong economy.
He also expressed concern over the rising price-hike and said the incumbent federal government should take pragmatic steps to provide relief to the people.
Expressing concern over the worsening law and order and attacks on the police in Khyber Pakhtunkhwa, he said the provincial government should pay heed to this issue or else the situation could spin out of control.
He said his party was in favour of empowering the women through education so that they could play their role in the development of the country. He said the QWP would spare no effort to help resolve the issues being faced by the women.
Known political figures Murad Ali Tajik and Dr Gohar Ali Shah also announced joining the QWP on the occasion.