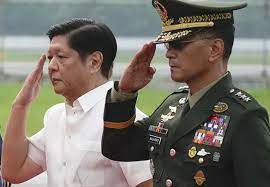 Philippine President Ferdinand Marcos Jr. has replaced the Philippine Military Chief, General Bartolome Bacarro with a retiring military officer Lt. Gen. Andres Centino as the new Army Chief, a move that was very unusual and surprising for many as General Bacarro hold office five months ago, and his three years term was supposed to end in August 2025. Interestingly, Lt General Centino was due for retirement next month and he has been raised to the post after superseding over a dozen senior generals of the Philippine military.

Philippine President Ferdinand Bongbong Romualdez Marcos Jr. commonly known as Bongbong appointed General Bacarro as Army Chief about five months ago and now suddenly reversed his decision and posted a junior general in the topmost position of Manila’s armed forces. The move comes after the Philippine President returned home after a controversial four-day state visit to Beijing amid the ongoing tense situation at the Philippine-China sea borders along with decades-long territorial disputes in the South China Sea. After landing home Manila’s ruler replaced the country’s military chief as the most urgent job, which clearly indicates conflicting ideologies of both leaders regarding Philiphine’s defense priorities vis-a-vis Manila’s bilateral relations with Beijing. The Philippines military has a history of restiveness, failed coups, coup attempts, drug trade, and corruption scandals, while successive leaders launched multiple efforts in the past to instill professionalism in the military and insulate it from politics and corruption, yet the men in uniform fear the rulers and Bongbong changed the Army Chief to secure his seat.

Like all other leaders, Bongbong is currently consolidating his rule in the country through multiple recipes including the recruitment of Vloggers for image-building, enrollment of social media campaigns for character assassination of political opponents, and the appointment of his trustful office bearers in government departments to smoothly and securely sail through his term in office. Meanwhile, Manila’s Ministry of Interior has asked nearly 1,000 police and military generals and colonels to quit and allow a committee to investigate and weed out top officials involved in illegal drug trading. After applying all tacts and tools, Manila’s powerful ruler resorted to weed out all senior bureaucracy in the armed forces by posting his blue-eyed junior officers so they always obliged him and cause no problem for his rule throughout their service.