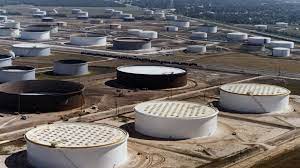 The Biden administration released some 180 million barrels of oil from America’s emergency stockpile ahead of the 2022 midterm elections, ostensibly to try to get a grip on the skyrocketing price of gas at the pump, with the reserve subsequently tumbling to its lowest levels since 1983.
Tasked with the purchase of three million barrels of sour crude oil for the Strategic Petroleum Res-erve in February, the US Department of Energy has reportedly rejected multiple offers from producers, hoping to get a better deal.
Informed sources told US business media that the offers the DoE has received so far have been turned down due to prices being deemed too high, and for failing to meet other requirements, which were not outlined in any detail.
The failure to get a deal means the purchase will be put off until an unspecified later date, the Energy Department has confirmed in a statement.
“DoE only select bids that meet the required crude specifications and that are at a price that is a good deal for taxpayers. Following a review of the initial submission, DoE will not be making any award selections for the February delivery window,” the department said Friday.
Neither the DoE nor the media sources offered any information on which producers submitted bids, nor the possible reasons, besides cost, that they were turned down.
Risky Strategy
Washington’s strategy of holding off on the purchase of crude oil to fill up its depleted reserves bears a passing resemblance to the disastrous policy by Europ-ean countries in the spring and summer of 2021 to g-amble with their energy se-curity by holding off on re-filling their underground n-atural gas storage reserves, hoping for a drop in prices at a later date. The price dr-op never came, and the su-rge in orders caused by pent up demand caused a major supply crunch in the fall and winter of 2021, which was exacerbated through 2-022 by shocks caused by t-he crisis in Ukraine, and B-russels’ rejection of Rus-sian energy. It remains to be seen how the US Energy Department’s strategy will play out in the long run.
Created in 1975 in the wake of the OPEC oil embargo, the US Strategic Petroleum Reserve (SPR) is, as the name suggests, America’s backup energy stockpile, designed to cushion the blow of any major domestic or global emergency that results in a dramatic decline in oil production or imports.
In January 2022, the United States had some 593 million barrels of sweet and sour crude oil in its emergency reserves, enough to last the country – which consumes about 20 million barrels of petroleum daily, approximately 30 days in case of a complete halt in production and imports for any reason. In March of 2022, President Biden ann-ounced a historic release of 180 million barrels of oil, and by December 30, the reserve had plummeted to 372 million barrels, enough for about 18-and-a-half days of import- and production-free consumption.
Biden’s critics fumed over the president’s policy, not just over the release of the SPR itself – which they deemed a populist move designed to improve the Democratic Party’s chances in the 2022 midterms, but in the way the release was handled. In July, Republicans demanded that the president be impeached and brought up on criminal charges after media revealed that over five million barrels of oil released from the reserve had been shipped abroad to India, European countries, and at least 950,000 barrels to Sinopec, a Chinese energy giant that Hunter Biden had invested in.
Oil prices began to tumble this past summer after reaching a high of up to $120 a barrel for WTI cr-ude in mid-June, with WTI currently trading for about $74 a barrel, with Brent cr-ude at $78.50 and Russia’s Urals blend at $49.