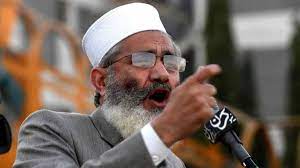 Addressing a protest rally against skyrocketing inflation at The Mall Lahore on Saturday, he reminded the PDM and the PPP about their anti-inflation rallies and long marches, questioning both about their performance since April.

He said the ruling elite was in consensus that they would keep the people deprived even from basic needs.

Careless of the fact that common man was standing in queues to purchase a bag of flour, the rulers were badly engaged in their fight for the protection of self-interest.
He linked the inflation, poverty and economic disaster to the corruption and unfair distribution of national resources.

Had there been a strong system of accountability, majority of the so-called leaders of the main political parties would have been in prison, he said.

The JI chief said the governments had never used foreign loans for public welfare or set the direction of the national economy.

Instead, he added, the money went to the pockets of the rulers. Instead of putting burden on the public, the ruling parties and their leaders should have paid the public debt from their own accounts.

He said the rulers looted the resources and made the country a laughing stock in all over the work.

Pakistan, he said, was gifted with enormous resources but the issue was their fair distribution.

Siraj said the ruling troika was badly exposed and failed to fix the problems.
They had been given opportunity to serve the country repeatedly but they disappointed the masses on every occasion, he said.

The JI chief added the country needed honest and capable leadership and only the JI had the ability to put Pakistan on track.

He appealed to the people to vote for the JI in coming election instead of father testing the already tested troika. (INP)