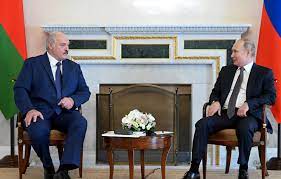 According to the media, a large contingent of the Russian military equipped with the latest military arsenal has reached Belarus to participate in a joint military drill in the neighboring state. Meanwhile, Russia also provided more modern weapons and related equipment to its close ally to boost military cooperation between the two nations. According to the Belarusian Defense Ministery,

Russian Strongman Vladimir Putin and Belarusian long-term authoritarian ruler, Alexander Lukashenko had forged a close Strategic partnership between the two countries. Both nations had close economic and trade ties along with comprehensive security and defense cooperation under the CESTO framework while a Russian military contingent permanently stayed in Belarus in the past decades. Russia had always supported its close ally during its diplomatic row with Western nations over the issue of illegal migration, human rights, and trade disputes. Currently, massive Russian military mobilization toward Belarus had created fear in western nations bordering Belarus including Ukraine, Lithuania, Latvia, and Poland about a possible Russian invasion amid ongoing conflict between Russia and Ukraine.

Both Moscow and Minsk have rejected such notions but announced a large-scale military drill near the Belarus-Ukraine border in the coming days.

Earlier, Russia massed thousands of military troops near the Belarus border with Ukraine under the pretext of a military drill before launching February 24 invasion agaisnt Kyiv and now Kremlin again gathered its forces in Belarus on the same lines. Russia has used Belarusian airspace for drone and missile attacks on Ukraine. Therefore, Russia is likely to use Belarus soil for launching another attack agaisnt its neighbor once more in the future. Presently, the Ukrainian nation has proved its wits during the year-long war while desperate Russia can risk another invasion agaisnt any nation to trade a bargain for a plausible end to its so-called special operation which has now become a disgrace for Moscow.