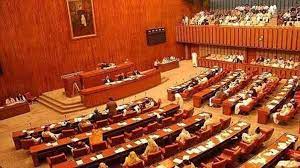 ISLAMABAD: The details regarding the expenses of the Prime Minister’s Office from 2019 to 2021 were presented in the Senate on Tuesday. The Senate meeting was held under the chairmanship of Sadiq Sanjrani.

During the question hour, PPP Senator Bahramand Tangi said former prime minister Imran Khan talked about coming to office by a bicycle and preached simplicity but travelled by a helicopter. The senator said according to the data, Imran Khan spent Rs1 billion as the prime minister in the last three years. Minister of State for Law Shahadat Awan said that during three years a budget of Rs1.17 billion was allocated for the Prime Minister s Office while the expenses remained more than Rs900 million.

In response to the allegations, Senator Shehzad Waseem asked for the details for flood funds and said how much and where those funds were allocated. “They had to submit the details of the crowd that they had taken to the conference in Egypt. Where did the money go that was taken from the world conference, or they are having the intention to spend the money for their personal use?” he interrogated. On Senator Shahzad Wasim’s question, Shahadat Awan said an irrelevant question had been asked. “If a written question is submitted according to the rules, I will provide all the details,” he said.

Speaking on the floor of the Upper House of the Parliament, the veteran PPP leader said, “The Constitution, passed on April 10, 1973, was authenticated on April 12 and promulgated on August 14 [of the same year.] So, this is the Golden Jubilee Year.” Raza Rabbani said that in this regard he had written a letter to the prime minister requesting to dedicate the whole current year to ‘the Constitution of 1973’, besides arranging seminars and events across the country to create awareness about the Constitution.

He said the Pakistan Peoples Party Parliamentarians (PPPP) had already ‘accepted’ 2023 as ‘the Constitution Year,’ and hoped that the government would also consider it in the same way. Earlier, the Senate referred three bills, passed by the National Assembly and transmitted to the Upper House of the Parliament, to the its Standing Committees for further deliberation on the proposed legislative amendments.

Advisor to the PM on Kashmir Affairs and Gilgit-Baltistan, Qamar Zaman Kaira on behalf of Minister for Water Resources Syed Khursheed Ahmed Shah moved a bill, further to amend the Pakistan Council of Research in Water Resources Act, 2007 [The Pakistan Council of Research in Water Resources (Amendment) Bill, 2022]. On the other hand, Chairman Senate Muhammad Sadiq Sanjrani deferred a bill that was meant to amend the Trade Organizations Act, 2013 [The Trade Organizations (Amendment) Bill, 2022] after the Minister of State for Law and Justice, conveyed the request of Minister for Commerce Syed Naveed Qamar about its deferment for the time being. (INP):