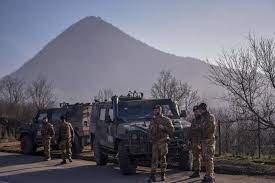 Kosovo declared independence from Serbia in 2008, but Belgrade has refused to recognise it and encouraged Kosovo’s 120,000 ethnic Serbs to defy Pristina’s authority — especially in the north where ethnic Serbs make up the majority.

The Serbian army has been put on a heightened state of alert over tensions with Kosovo multiple times in recent years — the last time in November after claiming that several drones entered Serbian airspace from Kosovo.

On December 10, Serbs in northern Kosovo set up barricades to protest against the arrest of an ex-policeman suspected of being involved in attacks against ethnic Albanian police officers.

The blockades have coincided with a rise in reported shootings, the latest on Sunday, according to NATO-led peacekeeping force KFOR.

“Serbia’s president… ordered the Serbian army to be on the highest level of combat readiness, that is to the level of the use of armed force,” Defence Minister Milos Vucevic said in a statement.

He added that President Aleksandar Vucic also ordered the special armed forces to be beefed up from the existing 1,500 to 5,000.

Serbia’s interior ministry also announced that “all units (will) immediately come under the command of the chief of general staff”.

These orders from Vucic come after army chief General Milan Mojsilovic was dispatched to the border with Kosovo on Sunday.

“The situation there is complicated and complex,” Mojsilovic said Sunday.

Northern Kosovo has been especially on edge since November when hundreds of ethnic Serb workers in the Kosovo police as well as the judicial branch, such as judges and prosecutors, walked off the job.

They were protesting a controversial decision to ban Serbs living in Kosovo from using Belgrade-issued licence plates — a policy that was eventually scrapped by Pristina.

But the mass walkouts created a security vacuum in Kosovo.

Pristina attempted to schedule the December 18 local elections in Serb-majority municipalities — but it was postponed after the announcement caused widespread outrage and the main Serb political party said it would stage a boycott.

Then on December 10, an ex-policeman suspected of involvement in attacks against ethnic Albanian police officers was arrested, outraging ethnic Serbs who erected the barricades that paralysed traffic around two border crossings.

Just hours after the barricades were erected, Kosovo police said they suffered three successive firearm attacks on one of the roads leading to the border.

KFOR, which has increased its presence and patrols in the region in recent months, said the latest bout of violence came Sunday, when shots were fired in the direction of Latvian soldiers embedded with the force, Kosovo’s defence ministry tweeted.

KFOR said it was investigating the incident, and added there were “no injuries or material damage”.

Serbian Prime Minister Ana Brnabic said last week the situation with Kosovo was “on the brink of armed conflict”.

But Kosovo’s security council — which met Monday — blamed Serbia for the latest deterioration in relations.

It accused Serbia of “acting with all available means against the constitutional order of the Republic of Kosovo”.

Serbs account for about 120,000 of Kosovo’s 1.8 million population, which is predominantly ethnic Albanians.