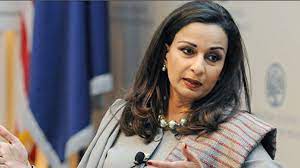 ISLAMABAD: Federal Minister for Climate Change Senator Sherry Rehman on Saturday in her new year’s message expressed the hope that in 2023 the country would completely come out of the crises caused by the previous government.

In a statement issued here, the federal minister wished Happy New Year to everyone.

Sherry said the year 2022 was a very difficult year for Pakistan.

“Pakistan has been at the center of world attention due to historic floods and the worst effects of climate change. A quarter of the country and more than 33 million people were affected due to rain and river floods,” the minister said.

She added that more than 1,700 people died, houses, roads and infrastructure were severely damaged. Such devastation caused by the environmental crisis was unprecedented in recent history, the minister said.

Due to the previous incompetent and failed government, the coalition government had to take difficult and unpopular economic decisions to save the country from default as soon as it came to power, Sherry Rehman said.

“Millions of our brothers and sisters are still living homeless in these winters. My message to people on the New Year is to support the flood affected people in their full recovery. Their complete restoration is a shared responsibility of all of us. We should all be hopeful for the year 2023,” the minister said.

She concluded with her prayer, “We pray to Allah Almighty that the new year will be a year of stability, progress, prosperity and happiness for the country and the nation.” (APP)