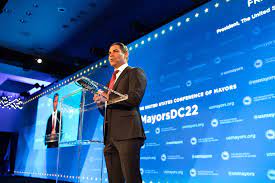 WASHINGTON: Special Representative for City and State Diplomacy Ambassador Nina Hachigian will participate in the United States Conference of Mayors’ 91st Winter Meeting, January 17-19, at the Capital Hilton Hotel in Washington, D.C. This gathering will bring mayors from across the country together to discuss key challenges facing America’s cities.

Ambassador Hachigian will participate in a roundtable on A Mayor’s Role in International Diplomacy at the conference, as well as meet with mayors to introduce the new Subnational Diplomacy team’s efforts to coordinate the Department’s engagement with mayors, governors, and other local officials in the United States and around the world and preview the upcoming 2023 Cities Summit of the Americas in Denver.

Ambassador Hachigian will join Secretary of State Antony J. Blinken, who will deliver remarks at the meeting on Wednesday, January 18, 2023, at 8:45 a.m. EST. This will be the first address to the conference by a Secretary of State and underscores the critical role mayors are playing on the international stage. Secretary Blinken’s remarks will be open to press and streamed live on the Department homepage and YouTube channel .